Wyrmwood: Road of the Dead 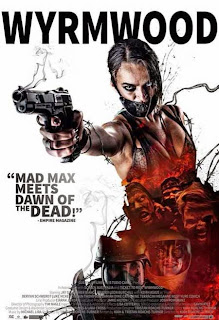 There's few make genre movies quite as interesting as those of the Aussies. Their weird filmmaking prowess is such that there's a whole documentary dedicated to the exploits of Ozploitation (the itself-rather-fantastic Not Quite Hollywood). The Aussies have been relatively quiet in recent years, but they're back on the map with the critically and fanboy acclaimed zombie effort Wyrmwood: Road of the Dead.

I'll make no secret of the fact that I'm sick and tired of zombies; especially so in no-budget cinema. I'll make an occasional exception for The Walking Dead, but only during its more interesting half-seasons and finales (Alexandria, basically). Otherwise, I could quite happily see the subgenre die off for a while before its next inevitable resurrection or (good) [REC] sequel. Wrmwood, however, is one of the better ones. I haven't had this much fun with a zombie film since the equally crazy Dead Snow 2.

A lot of that isn't even down to the zombies; that'll be thanks to its frantic Sam Raimi/Edgar Wright esque direction, gory ultraviolence and Mad Max approach to zombie killing. Even better, its human villain is an actual mad scientist, and we don't get nearly enough of those in modern horror cinema. With his his syringes full of green gunk (how very Herbert West), zany dance routines and laconic bastardry, he makes what could have been a series of dull torture scenes seem colourful and exciting. Fair play to poor Bianca Bradey, who has to give most of her own performance through her eyes alone - tied to a wall with a strap over her mouth for most of the running time, I'd forgotten what her voice sounds like by the film's halfway mark. She does a great job though, managing to convey strength and badassery in spite of the fact that she spends more time tied up in this film than most bondage models do during a day's work (full disclosure: most bondage films are only about ten minutes long).

Hers is a more interesting story than the actual road trip element of Road of the Dead, which is pretty slow and meandering at times. Her onscreen brother makes a good working class action hero, but lacks character beyond the death of his family and some pretty entertaining rage fits. It's a little long, a little slow and a little lacking in momentum, but Wyrmwood is one of the better zombie films of recent years. With a sequel on the way, let's hope that next time we get a story worthy of the actors and the world their characters inhabit. Because what we have here, ultimately, is a road which doesn't really go anywhere. Sub pun: it's not great, but you know what they say about roads and good intentions.