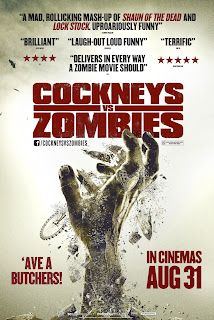 What sounds like it should be one of the worst zombie movies ever takes an unexpected turn when it actually manages to be rather good. From the title and cast and Britishness alone, I had envisioned another Strippers vs Werewolves debacle, Dead Cert or Stag Night of the Dead. If there's one thing worse than low-budget British zombie movies, it's low-budget British zombie movies with gangsters thrown in for good measure. Especially when one of the gangsters is Billy Murray, as it inevitably always is.

Billy Murray is not in Cockneys vs Zombies, which is a good start. Instead there's another few ex-Eastenders (Paul Trueman and Zoe Slater, in case you care about that sort of thing, which you shouldn't), Richard Briers, an ex-Lock Stock boss, and Brian from off've My Parents are Aliens. 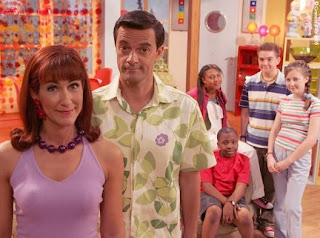 As a pair of would-be cockney wideboys attempt to rob a bank, an outbreak of the living dead breaks loose in Eastend London. Meanwhile, the boys' kinda gangster grandfather tries to keep the zombies at bay as they converge upon a local old folks' home. The bank heist story is diverting enough, but the real fun is in seeing the likes of Richard Briers, Honor Blackman and Dudley Sutton fighting zombies. The film's mileage might depend on just how hilarious you find the thought of old people swearing and shooting sub-machine guns, but it's far better than it had any right to be. It's perhaps the best homegrown zombie comedy since Shaun of the Dead.

Some of the gags work better than others though, and Ashley Thomas's character is a pain in the arse. Michelle Ryan struggles to make much of an impact as Katy, feeling as though the director was trying too hard to make her seem cool and sexy. This fails as much as it did in Doctor Who, when they tried exactly the same trick. Rasmus Hardiker, Harry Treadway and the others fare much better, sharing a nice chemistry and general affability. Tony Gardner was Brian on My Parents are Aliens, so is therefore exempt from criticism. The late institution Richard Briers is fun too, getting in a few funny lines and a great chase scene. For all the gore and swearing, it's an unexpectedly heart-warming movie.

Ahem. Excuse me, while I make a note to NEVER FUCKING DO THAT AGAIN.