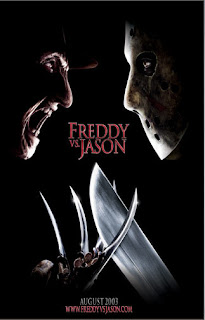 Director: Ronny Yu (2003)
Starring: Monica Keena, Jason Ritter, Kelly Rowland (!) Robert Englund, Ken Kirzinger,
Find it online: IMDB, Amazon UK, Amazon US
A match-up eagerly awaited by horror fans since Freddy's arm made its cameo in Jason Goes to Hell. It took ten years to happen - during which time, Jason blasted off to space and Freddy went all meta - but was it worth it?
For this easily pleased girlpants, yes, it was. It may not be a perfect - or even legitimately good - movie, but for Icon vs Icon action, Freddy vs Jason certainly provides plenty of bang for your boomstick. Especially when you compare it with the watered down likes of Aliens vs Predator.
Freddy Krueger (Englund) is trapped and mostly powerless. The youths of Springwood, thanks to a government conspiracy, have all but forgotten about him. Without their fear, Freddy hasn't the power to harm them. So, in order to return to his full glory, he enlists the help of pissed off undead goalie Jason Voorhees (Kirzinger) and sends him up Elm Street way, in the hope that he'll shake things up a bit. And shake things up he does. The kids are scared shitless, which opens a door into their subconscious for Freddy. Only Jason gets greedy, and won't stop murdering Freddy's victims. Cue a petty turf war between the two.
Freddy vs Jason is shit, but you can't help but love it. The script is laughably bad - "wait, Freddy died by fire - Jason by water - can we use that?" - and some of the kids' acting is cringeworthy. Lead couple Monica Keena and Jason Ritter have no chemistry or charisma between them ('Jackface' Ritter has a habit of smiling when he's supposed to be scared or upset) and the presence of Kelly Rowland is simply bizarre. I'd have preferred for Katherine Isabelle to be around to be a bit longer too, since she's by far the most competent of all the teens. Too much Kelly Rowland and not enough Katherine Isabelle. That said, it does see Rowland murdered by Jason Voorhees, which is infinitely great. Freddy's riding on a Dream Warriors high, and gets a few good lines (and a bit of casual racism directed at Rowland too) - whilst still managing to be fairly menacing at the same time. He's certainly not cuddly anymore - his opening scene is chilling stuff. Kirzinger isn't quite as imposing as Kane Hodder, but does a great job, all the same.
The main event is quite possibly the reason my eyes were invented, since it never gets any less awesome, no matter how many times I watch it. It spans both real and dream worlds; from Elm Street to Crystal Lake (only just down the road, apparently) and is extremely gory. Limbs are torn off, bodies are impaled, Krueger is beheaded, Jason is revealed to be a whiny bitch child (scared of water, really???) and the teens are hacked up willy-nilly inbetween. True, it does seem a little oddly one-sided, and Freddy's kill-count is pathetic, but a disappointment it is not.

If you think about it too hard, Freddy vs Jason probably doesn't deserve the high rating I've given it, but I haven't the heart to rate it anything less. After all, it's probably the last time we'll ever get to see Freddy Krueger and Jason Voorhees in their original form. As a send-off, they could've had so much worse.

Email ThisBlogThis!Share to TwitterShare to FacebookShare to Pinterest
Labels: A Nightmare on Elm St, Friday the 13th, slasher movies