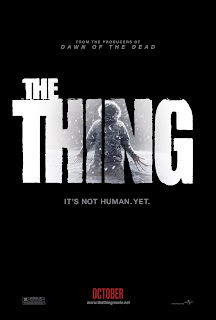 Director: Matthijs van Heijningen Jr (2011)
Starring: Mary Elizabeth Winstead, Joel Edgerton, Ulrich Thomsen
Find it: IMDB
A remake and prequel at the same time. More remake than prequel though, because it's exactly the same story as John Carpenter's The Thing, except less good and with a crappy CGI finale tacked on at the end.
An alien spacecraft is discovered near an Antarctica research site. When alien remains are pulled out of the ice, paleontologist Kate Lloyd (Winstead) is called upon to assist in the excavation. No sooner have they returned the alien remains to their research base than it comes to life, breaks free and starts murdering scientists. The team quickly burn it to death, but not before one of their number becomes infected. Tensions become fraught, a helicopter crashes and soon Kate has a fight for survival on her hands. Unable to decide who's human and who's an alien, the stupid humans bicker and fight until only Kurt Russell can save the day! Bully for them, Kurt Russell isn't in this movie.
Mister Eko from LOST is in it though, which pleases me. Anyone who knows me knows that I have a massive fetish for ex-LOST castaways in my movies. I'll even take Matthew Fox in Smoking Aces with a giggle of delight. Eko isn't given much to do, but he rounds off a solid cast along with Mary Elizabeth Winstead and Ulrich Thomsen. Joel Edgerton is fairly bland, not even managing to muster a decent beard out of it all. There are some manly beards that are nearly as good as Kurt's though, worn by the Norwegian characters. The most interesting thing about this Thing is the decision to make the cast (and director) so Norwegian. It's an effect that's spoiled, however, by the Norwegian fellows essentially being cannon fodder for the Americans.
The creature designs are fine without being as iconic as the original monsters. There's far too much CGI; none of the kills as fun as the 'hands through the chest' moment in Carpenter's bit. But they sound very good, and I particularly enjoyed a scene in which a man's hands fall off and attack the rest of the humans. If only it hadn't all been CGI, I would probably have enjoyed the monsters more. Rated a mere 15, there isn't enough gore to make up for the crappier effects. I much preferred the videogame sequel for the PS2 - the only sequel or remake that The Thing really needs.
The Thing is a serviceable piece of sci-fi horror, similar in quality and design to the likes of Aliens vs Predator and Whiteout. Even if you've never seen Carpenter's Thing (WHAT), you won't be wowed. The thing is, the best thing about The Thing is that it made me want to watch The Thing again.