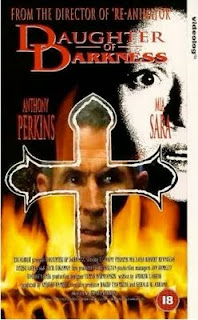 Director: Stuart Gordon (1990)
Starring: Anthony Perkins, Mia Sara, Robert Reynolds, Jack Coleman
Find it: IMDB
An uncharacteristically dull Hammer rip-off from the usually reliable Stuart Gordon. Daughter Of Darkness sends Katherine Thatcher (Sara) to the dingy underworld of Romania in search of her missing father. Because it's Romania, she finds vampires, terrified Gypsies and Anthony Perkins. Being British, I can't help but suggest that vampire-populated Romania is the perfect place for a woman with the surname 'Thatcher'.
Anthony Perkins pretends not to be Katherine's father, but he might as well wearing a Darth Vader helmet for how obvious it is. She is quite stupid though. At one point, vampire Anthony Perkins is chained to the floor in front of a window as sunlight (very) slowly burns him to death. She runs off for about an hour to get help. Not once does she consider, y'know, covering the window.
Like Sookie in True Blood, it emerges that Katherine is a very special breed of human that all the vampires want to do sex with. Katherine is capable of carrying vampire babies. Daywalker vampire babies, like Blade. And talking of Blade, the vampires in Daughter Of Darkness sort of resemble the Reapers in Blade II; instead of teeth they have a little thing (the technical term) that pops out of their tongue and does all the sucking. Well, most of the sucking. The film does quite a lot of the sucking too. Predictable joke.
This little innovation aside, the vampires are pretty rubbish. Most of them speak in Romanian accents, wear capes and sleep in coffins. One of them even looks like Grampa from The Munsters. In this age of sparkling vampires, sexy vampires and little Castrato vampires, Daughter Of Darkness has not aged very well. The only amusement to be had is in seeing Anthony Perkins hamming it up with a silly accent. The cheerleader's Dad from Heroes plays a supporting role as a jerky love interest; he probably delivers the only decent performance in the whole film.
Daughter Of Darkness is a disappointing failure from one of my favourite directors. Jeffrey Combs doesn't even turn up, which is usually a given in a Gordon film. The story is passable and the direction competent, but the villains are stupid and the characters are all idiots. It's an interesting curiosity, but not much beyond that.