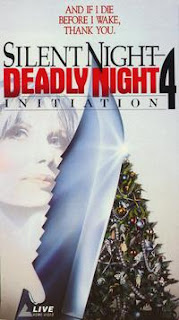 
One dark night, a woman jumps off the rooftop of a high-rise building and bursts into flames. Reporter Kim (Hunter) investigates this strange case of human combustion, only to discover a strange cult dedicated to the Egyptian God Isis. Just another Silent Night, Deadly Night movie, folks.

Clint Howard plays a man called Ricky (presumably not that one, given his intact brain) and Reggie Bannister is Kim's editor. Directed by Brian Yuzna, I had hoped for something a cut above the rest from this sequel. It's certainly different to the previous three movies, forgetting the killer Santa motif (well I am getting tired of typing out the name 'Santa Claus') and doing its own thing entirely. It's an approach that didn't work for Halloween 3 and doesn't work for this. The Caldwell brothers and their Santa fetish were the most enjoyable thing about the Silent Night movies.

As she investigates the mysterious woman's flaming suicide, Kim comes to the attention of bookseller Fima, who hopes to initiate Kim into her cult. I much prefer this franchise when it's lopping the heads off've Nuns and pumping Santa full of lead. Fima woos Kim by giving her free books and inviting her to sinister picnics in the park. The slow burning story isn't a particularly interesting one, despite the best efforts of Yuzna and Howard. It has a creepy atmosphere and great background music, and is recognisable as a Yuzna film. It's not alternately known as Bugs for no reason, with plenty of foul insects about to add to the unpleasant atmosphere. There are some genuinely horrible bits involving massive slimy bugs and Clint Howard in a Clockwork Orange style rape mask. A gloopy, surreal nightmarish sequence in the middle of the movie actually manages to be the most creepy thing in the whole series.

Given the lack of a proper villain, Howard is great. Aside from Reggie Bannister in a brief cameo, he's the only actor with any presence. Maud Adams is useless as Fima, whilst Neith Hunter is unremarkable as Kim. A cast of wrinklies round off Fima's cult.

Silent Night 4 wasn't as bad as I'd anticipated - it's far more bearable than its immediate predecessor - but it's a forgettable, directionless entry in a series that should have stopped after the first movie. The story is boring and stupid, the central mystery uninteresting. This Silent Night is for franchise completists only.