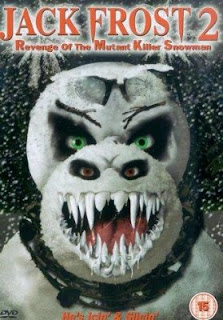 It's your Horror Review Advent Calendar.
25 Christmas themed movies.
Ho, ho, ho.
Director: Michael Cooney (2000)
Starring: Christopher Allport, Eileen Seeley, Scott MacDonald
Find it: IMDB
Sam Tiler (not that one) is in therapy following his trauma at the hands of killer snowman Jack Frost. To relieve some stress, he packs his bags for a Carribean holiday with the wife (Seeley). Yes, it's a I Still Know What You Did Last Summer kind of sequel. Jack Frost is back too, resurrected when scientists dig up the can of anti-freeze that holds his imprisoned soul. Wait, what? A maintenance worker wakes Jack up by spilling a cup of coffee into the vat of anti-freeze, because that could totally happen, and he too sets sail.
This time even heat and anti-freeze can't stop Jack. His powers increased, he freezes a whole room like a low-budget version of The Day After Tomorrow. Despite being an invincible snowbastard, Jack still chooses to pick his victims off one by one. It's tedious at times, but mostly quite amusing and imaginative. The humour works better than it did in the previous film. It's really, really bad humour, but I laughed. Most of the time, anyway. "It's a sign that there's traffic," says Anne, trying to appease her husband's nerves, "a traffic sign, geddit?" Oh how nobody LOL'd.
For a movie about a mutant killer snowman, there's a complete dearth of mutant killer snowmen. There are quite a lot of snowballs though. Most of the time, Jack exists only as a disembodied carrot or ice cube. The kills are quite good, nevertheless; particularly the one where a woman eats a Jack Frost ice cube and then her head explodes. A naked woman goes swimming and Jack says "I wouldn't mind a little breast stroke myself." Heh. And there's actually some really good gore later in the movie, seemingly inspired by Gremlins in its anarchy.
Embracing its inner silliness has done Jack Frost 2 the world of good. Where the original movie was surprisingly dull, the sequel is fun and infectiously likeable. Bless, it was made in an era where it could snow on a Carribean island and no-one would mention global warming.

Email ThisBlogThis!Share to TwitterShare to FacebookShare to Pinterest
Labels: 2011 Christmas special, christmas, So bad it's good