8. Tales From The Crypt: And All Through the House 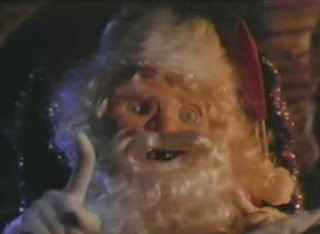 It's your Horror Review Advent Calendar.
25 Christmas themed movies.
Ho, ho, ho.
Director: Robert Zemeckis (1989)
Starring: Mary Ellen Trainor, John Kassir, Larry Drake
Find it: IMDB
A chilly segment of the horror chocolate orange that is Tales From The Crypt. But not the one starring Joan Collins. ...And All Through the House is an episode of the television series, directed by Robert Zemeckis. Despite telling the same story, this version does it in an altogether more colourful fashion (befitting the original garish EC Comics). There are even jokes; all of them funnier than anything in The Santa Clause. One of them is even a "Santa Clause" joke.
One merry Christmas Eve, Joanne (Trainor) murders her husband, smashing his head in with a poker. Those Tales From The Crypt people; always murdering their bloody relatives. As she's hiding the body, she hears a news bulletin announcing that there's a murderous bastard on the loose wearing a Santa outfit. Joanne runs into the killer outside, scoping her house with an axe. She fights him off and barricades herself indoors. But she can't call the police on account of her serious case of dead husband. Doom is brought about when her greedy little fuck child lets 'Santa' into the house. With a nasal cry of "where are my presents?" mummy's death sentence is signed. Children; little shits would start the apocalypse if they thought there was a present in it for 'em. They don't tell you that on the John Lewis adverts. 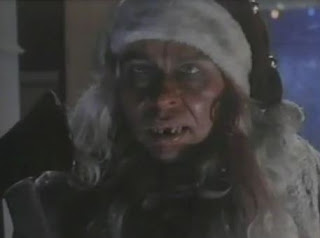 The wonderful Larry Drake plays psycho Santa, trashing the set with the same glee as he did in Darkman and Doctor Giggles. This version lacks the original's creepiness (and Joan Collins' disturbing 1970s' sultriness) but tries to make up for it by being louder, more melodramatic and funnier. But like any scene-for-scene remake, if you've seen the original, it all feels a little predictable and pointless. I hoped for some sort of twist on the ending, but it's pretty much the same. If anything, it's less graphic. But if you've not seen the original Tales From The Crypt movie (WHAT) ...And All Through the House will be a treat.
Inferior or not, it does have its uses. When I was but a wee brat, my grandmother used to have a phrase saved for whenever we misbehaved. "Father Christmas is up that chimney," she'd say, "he's watching you." Ever the atheist, I believed even less in Santa than I did god. But my stupid cousins, they were shitting themselves. Like clowns, Santa is every bit as terrifying as he is jolly and lovely. Just imagine if my dear old gran had let us watch Tales Of The Crypt. Parents take note: Used correctly, Larry Drake Santa Claus will keep your kids in line for years to come. Next time that little ponce refuses to eat his or her sprouts, show them this episode. Larry Drake's up that chimney. He's watching you.