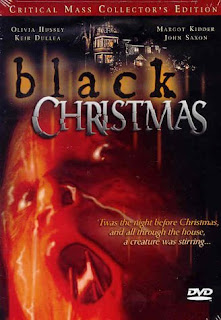 
The Halloween of Christmas movies, in that I was as guaranteed to review this today as I was Halloween on October the 31st. Hey, it's Christmas. Why should I waste my time being original or having ideas when I could be eating chocolate or getting shitfaced. Besides, I'll take any opportunity to sing Black Christmas's praises as I can get. It's an underrated slasher gem and a Christmas mainstay in my DVD player. Black Christmas stars one of the greatest genre actors of all time alongside The One True Lois Lane herself. A creepy criminal harasses a sorority house at Christmas time, growling filth down the telephone until Margot Kidder gives him a taste of his own sweary medicine.


It's a much darker, meaner movie than Halloween. In some ways, I prefer Black Christmas to John Carpenter's masterpiece. The understated Black Christmas is more stark, grimmer and it stars John Saxon. I find the atmosphere more chilling, a series of POV shots and telephone calls really setting the tone for things to come. Halloween was of course influenced by this minor classic, and it shows. Carpenter's use of the same techniques is more overtly stylised and cinematic, ramping up the tension and pace but feeling more cartoonish as a result. The deaths in Black Christmas feel more real. It's nearly as bloodless as Halloween, but I could have sworn that Black Christmas was gorier.

In its plastic-bag-over-the-head routine is one of my favourite horror deaths of all time. The bagged corpse in the rocking chair is tremendously creepy. Then there's the House Mother being dragged up into the loft. True story folks, that's what me bringing girls back to my house after a night out looks like.

Elsewhere, John Saxon plays a very archetypal John Saxon character. Were it not for the fact he has a different name in this movie, he could well be playing Nightmare On Elm Street's Lt. Thompson during the day job. There's a disappointing lack of rollneck jumpers to Saxon's performance, but he does a sterling job all the same. Little moments, like his cracking up at the word 'fellatio' are just adorable. Doomed house mother Mrs. Mac (Miriam Waldman) is fun. But best of the bunch is Margot Kidder's permanently inebriated lush, Barb. She's almost as intimidating as the actual killer, chugging wine from the bottle and swearing like a trooper. My kinda girl. That she's relegated to a supporting role is a shame - she's a far more interesting character than Jess (Hussey). All Scream Queens should be as feisty as Barb, it'd make a lot of movies more interesting. Most slasher bastards would wet their knickers after a lashing from Barb's Barbed tongue (I'm looking at you, Leatherface). It's little wonder that Clark Kent was always too shy to ask her on a date. It's the same that Jess is so comparably dull, but she's no worse than any other Final Girl out there.

Black Christmas is a fantastic festive horror treat. A Christmas Cracker, if you will. Ho ho ho. Happy Christmas, y'all. Hope Santa got you all something nice. Maybe a less predictable joke.