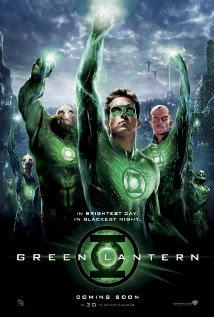 Director: Martin Campbell (2011)
Starring: Ryan Reynolds, Peter Sarsgaard, Blake Lively, Mark Strong
Find it: IMDB
After being pleasantly surprised by his performance in Buried, I had started to worry that hunky aftershave salesman Ryan Reynolds might be a little too charismatic to play rube superhero Hal Jordan in Green Lantern. Rest assured cynical me, Ryan Reynolds is every bit as dull and uninteresting as comic book Hal Jordan in this adaptation.
After getting his ass kicked by a yellow fear monster, intergalactic space cop Abin Sur crash lands on Earth and proceeds to die all over cocky test pilot (is there any other kind?) Hal Jordan (Reynolds). With his dying breath, Abin Sur passes on his power ring to Jordan and informs him that he too must become a space cop. The other aliens take an instant dislike to Hal, because all aliens instantly regard humans as stupid and useless. To be fair, this movie almost starred Jack Black. I can picture a version of Green Lantern in which Jack Black creates a giant set of arse cheeks to fart green gas all over Sinestro, before conjuring up a guitar and teaching the uptight Lanterns how to 'rock'.
Under the tutorship of purple-headed grump Sinestro (Strong) and a giant with a name that sounds vaguely like a racial slur, Jordan trains to become a Green Lantern. In a thoroughly obvious character arc, Hal decides that superheroism is too much responsibility for the likes of him, and heads off back to Earth. He lasts precisely ten minutes before Hector Hammond (Sarsgaard) shoots a helicopter out of the sky with mind bullets. Eventually Hal Jordan saves the day because of course he does.
Ryan Reynolds is the perfect Hal Jordan. I can totally see this Hal Jordan getting his rube butt kicked in All-Star Batman & Robin. There are a few stupid jokes and wisecracks, but Reynolds is suitably charmless. The costume looks ridiculous, particularly the mask. It's a worse superhero costume than even Captain America's. And with hair as distinctive as Ryan Reynolds', it's utterly crap for keeping an identity secret.
Still, the film is enjoyable in the same goofy kind of way as The Fantastic 4 (hey, I enjoyed it) and boasts some fun action sequences. Peter Sarsgaard, Mark Strong and Tim Robbins bring a little gravitas to what is essentially Van Wilder: Green Lantern Liaison. Is Ryan Reynolds doomed never to have his own comic book franchise?