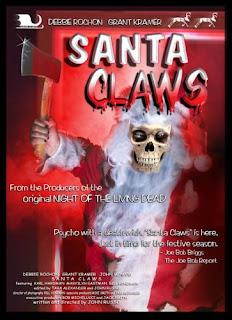 
One Christmas Eve, a jealous child finds his mother humping her new squeeze, a Santa-hat wearing fatty. Little Wayne digs out the family gun and blows them both away. All grown up, Wayne (Cramer) becomes obsessed with B-movie Queen and horror actress Raven Quinn (Debbie Rochon, pretty much playing herself).
Adult Wayne has grown up to look like a caricature of a 1990s' horror nerd, complete with beard and ponytail. He has conversations with a bust of Debbie Rochon Raven and collects memorabilia. Luckily for this stalker, he happens to live next door to the object of his affections. All the easier to knock off anyone who gets in his way, one by one.

As stalkers go, Wayne is very polite. He offers to babysit Raven's children, listens to her woes and murders anyone who gets in her way. He's pretty useful to be fair, not coming across as overtly weird, ponytail aside. It's only his puritanical tendencies that annoy Raven, telling her she shouldn't appear in as many nude scenes or date a producer.

What might look like yet another Killer Santa movie hardly even has a Killer Santa in it.  Wayne dresses in a balaclava and boiler suit most of the time, barely even acknowledging that it's The Most Wonderful Time Of The Year. There's hardly any Christmas at all in this Christmas horror movie. Nor any horror. It's as though they tacked some Christmas scenes onto their crappy stalker movie and called it Santa Claws. It's a waste of a perfectly good title. There is a claw though, best employed in a scene in which Wayne uses it to comb a woman's hair before poking her to death with it. Eventually Wayne combines the Santa outfit with the balaclava outfit, like some kind of Guerilla Santa Claus. 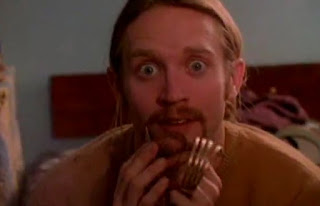 Far be it for me to bitch about nudity, but there is far too much of it in Santa Claws. Wayne's boring obsession is punctuated with scenes in which Raven's husband shoots naked photographs of various women. I resented these scenes because it made Santa Claws last even longer. It's not proper nudity either, just the softcore stuff that you can find if you look hard enough on Dailymotion or whatever. Not that I would know anything about that.

Santa Claws is not as bad as Satan Claus, but it's still one of the worst Psycho Santa movies out there.