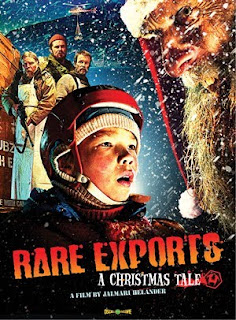 It's your Horror Review Advent Calendar.
25 Christmas themed movies.
Ho, ho, ho.
Director: Jalmari Helander (2010)
Starring: Onni Tommila, Jorma Tommila, Tommi Korpela
Find it: IMDB
A Christmas horror movie that treats its subject with relative seriousness, thereby imbuing it with more class and gravity than one would expect from an evil Santa film. Buried in the depths of the Korvatunturi mountains, excavators find Santa Claus. The Santa Claus. Soon afterwards, local children begin disappearing and young Pietari (Onni Tommila) finds mysterious footprints in the snow by his window. Santa Claus, as they say, is coming to town. Careful though, he's a biter.
Pietari's gloomy hunter father (Jorma Tommila) finds what he believes to be Santa, caught in one of his traps. He ties poor Santa up and hatches a plan to sell not-so Jolly Saint Nick to the highest bidder. It emerges that the going price for a Santa Claus is a lot less than I thought it would be.
It's something of a slow burner for a comedy/horror, but when it does kick into gear, the payoff is well worth the invested time. In its tale of a quiet, sensitive, lonely child finding his way in life, Rare Exports is like a Christmassy Let The Right One In. It picks and chooses its festive elements wisely, never outstaying its welcome. Particularly well employed is the way in which the characters use gingerbread to hold Santa at bay and a set of "rules"to keep you off've Father Christmas's naughty list. He's no Bill Goldberg, but you'll want to stay in his good books.
The biggest problem with Rare Exports is that you can only really watch it once a year. Never mind the turkey or presents, I'm counting down the days until I can watch this Christmas Tale again.