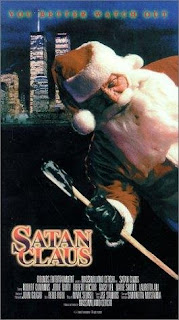 
A serial killer dressed as Santa stalks the streets of New York, lopping off victims' body parts to adorn his Christmas tree with. An actor, a police officer and a voodoo lady team up to stop him. At least, I think they do. Satan Claus is so dingy that it's impossible to tell what's going on.


I thought I'd seen the worst that Christmas horror had to offer with Don't Open 'Till Christmas and Silent Night, Deadly Night 3, but Satan Claus makes those movies look like holy Christmas masterpieces by comparison. You can rest some of the blame with the film's low budget, but that doesn't excuse the horrible story or the decision to play it relatively straight. "Is that why you cut off her head?" a man asks, after Satan Claus mercilessly murders his missus, "because it was beautiful?" Seriously, this film needs to work on its lighting; nobody in Satan Claus is 'beautiful'. Satan Claus is so dingy that even its own characters can't see what or who they're doing. The whole thing takes place at night in a city apparently devoid of lightbulbs. Even the movie's police station is drenched in darkness.

Satan Claus (Cummins) himself is terrible. He certainly doesn't seem like Satan, just another dick in a Santa suit. Even as murderous Santas go, he's nothing special. As he goes about his grisly business, Satan laughs like a rubbish Caesar Romero (even making a "hoo" noise at one point) and sings carols like a twat. When not decorating his tree with body parts, Mister Claus amuses himself by taunting the police Captain via telephone. I like how surprised the police are to hear that Satan Claus laughs during his murders, as though they expected sanity (fools, there is no Sanity Clause) from a man who goes around killing people while dressed as Santa. Then, because they had to work in the title somehow, the film elevates him to voodoo devil at the end. The denouement makes no sense. Just because no-one will see your 'twist' coming doesn't make it a good twist. No-one will see the twist coming because we expect movies to make sense nowadays.

A rampage towards the end is amusing, as is a rubbish voodoo witch character (Ali). Some of the dialogue is unintionally funny (the line "work, work, work candy bar. Work, work, work, hot dog" particularly cracked me up) as are the actors' deliveries. Satan Claus boasts the least passionate "you fucking son of a bitch" ever committed to film. A man delivers a desperate monologue on the evils of vigilante justice (yes, he says the phrase "judge, jury and executioner") that's so bad it had me hoping somebody would go all vigilante justice in his face with a shotgun.

At least Satan Claus is only an hour long. It could have been less. It's so dark, I think I might have spent ten minutes watching a blank television screen by accident.