In conversation with: Robert Englund (via Horrortalk.com) 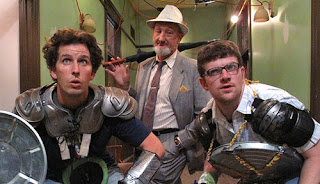 This article comes with massive thanks to horrortalk.com, who not only gave me the opportunity to carry out the following interview, but hired me as staff reviewer too. Show them some love, do.
At the inception of my love for all things horror, there was Robert Englund. Before I even knew horror was a 'thing', I was stood in a VHS rental shop with my parents, browsing the cassettes. Every time I visited a video shop, aside from all the Disney (hey, I was nine), it was the Freddy Krueger videos that always caught my attention. I would covet those Nightmare On Elm Street cassettes - with their gaudy, terrifying cover art - not even able to imagine the fateful nights when I would gleefully work my way through the Elm Street box set collection, from A Nightmare On Elm Street to Wes Craven's New Nightmare. In the corner of that video store stood a cardboard cutout of Freddy Krueger; the embodiment of my future of a horror fanboy. Years later, I watched Freddy's Dead, late at night, on TV after bedtime. From there, I was hooked.
Robert Englund is perhaps the biggest name in horror. The One True Freddy Krueger, Mister Englund is a genuine icon. His latest movie is The Mole Man Of Belmont Avenue, in which he plays a cranky tenant menaced by the titular Mole Man. I was lucky enough to speak with Mr. Englund. The full interview can be found at Horrortalk.com. 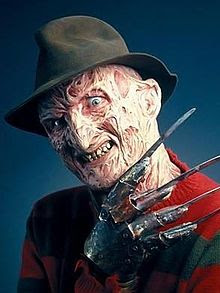 What can you tell us about The Mole Man of Belmont Avenue?

It's a low budget slacker Ghostbusters. I'm one of the tenants of a building inherited by two slacker brothers; and there's a creature that's eating all the pets. The tenants band together like vigilantes.

What attracted you to the project?

Both Mike and John's reputation preceded them – I knew they were a great comedy duo – and then I got the script and I loved it. I was laughing, I didn't put it down. I immediately called my agent up and said “I'd love to do this.” They had these incredible locations. They have such a great talent pool in Chicago that they can borrow from. I don't get to do a lot of comedy - it's always a gift when somebody lets me do it.

Do you look for anything particular in a role?

My rule has been, since Freddy vs Jason, that I will go where I'm wanted. The blessing for me is that horror and science fiction movies are huge internationally. I just finished a film in Bulgaria. And I was in your neck of the woods (England) in June. I just did a movie in the Shaun Of The Dead tradition called Strippers vs Werewolves.

The full interview can be found at horrortalk.com, where I also talk to the movie's writer & director duo, John LeFlamboy and Mike Bradecich, and hear Mr. Englund's thoughts on horror comedies and details on a potential new franchise amongst other things. See Molemanmovie.com for more details on The Mole Man Of Belmont Avenue.

Email ThisBlogThis!Share to TwitterShare to FacebookShare to Pinterest
Labels: A Nightmare on Elm St, interviews