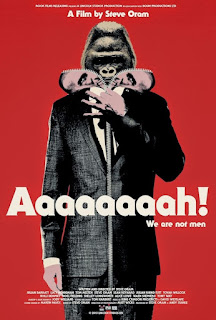 Toyah Willcox, preparing a lovely dinner in the kitchen, pauses to take a shit on the floor. Dirty business done, turd disposed of into the bin, she resumes cooking. Minutes earlier, we watch as Smith (Oram) and best pal slash subordinate Keith (Tom Meeten) take a joint piss on a photograph of the former's ex wife. This done, Keith lovingly wipes Smith's bell-end dry with a piece of tissue. All the time, no dialogue - just a series of ape-like grunts and shrieks.

It's The Planet of the Apes in the most arthouse sense. Writer, director and actor Oram's Aaaaaaaah! (eight 'a's, counted aloud every time I type that title) depicts a world not unlike our own - save for the crucial difference that everyone in it talks and behaves like apes. Kitchen sink drama by way of David Attenborough, we watch fascinated/repulsed (delete as appropriate) as a narrative begins to form. Helen (Dempsey) is the heroine of the piece, trapped under the rule of Alpha Male Ryan (Rhind-Tutt). Enter Smith, whose gatecrashing of a party threatens to throw the whole family unit into disarray. The rest? You'll have to work that out for yourself, as half of the fun here is deciphering the story, relationships and the ways in which this world works.

Those familiar with British cult comedy should recognise most of the cast, from Sightseers' Oram (magnificent as ever, and curiously scary) to Green Wing's Julian Rhind-Tutt and The Mighty Boosh's Julian Barratt (plus Noel Fielding in a small but definitely memorable role). Oh, and Toyah Willcox too, who proves admirably game in the face of all this monkeying about. Its satire is offered without judgement, although the sad, weary expressions of the beleaguered womenfolk speaks volumes.

It's never a good sign, reviewing a sequel, when one has to Google one's own blog to check whether you've reviewed the previous films in that series or not (turns out I reviewed one of them - and wrote a Letterboxd thing for the other, back when I used Letterboxd). Even worse: the fact that I watched the entirety of Insidious: Chapter 3 without ever realising that it was a prequel to two movies I have already (allegedly) seen.


Which is the thing about Blumhouse movies (either that, or a thing about my shitty memory maybe). I know I've watched most of them, from Insidious to Sinister, from The Purge to any number of the sequels, but I couldn't tell you any of the specifics. It's some of the most forgettable horror franchising I've ever seen. Well, I think I've seen it, anyway.

Insidious: Chapter 3, then. I remember enjoying the first (although my review isn't as positive as I recall) and not enjoying the second (although my Letterboxd whine isn't as negative as I recall either) - but nothing else beyond Darth Maul, a spooky shadow dimension and evil Patrick Wilson at some point. Maybe Lin Shaye too, although I'd forgive myself for mistaking the Insidious series for The Conjuring, which I have definitely already seen and forgotten.

And yet, the fact that I have forgotten more or less everything about Insidious and its sequel turned out to be a good thing. Not knowing that the film I was watching was a prequel, I spent the whole film convinced that certain characters were going to die. Which left me genuinely surprised by certain survivals and developments throughout. Bravo my stupid memory/copy and paste Blumhouse filmmaking.

The plot, while I remember it: following the death of her mother, plucky teenager Quinn (Scott) seeks out the assistance of talented medium Elsie (Shaye), hoping to contact her in the afterlife. Alas, Elsie initially refuses, and Quinn winds up harassed and attacked by a vicious demon from the Nether Regions (not the proper term for it, but as good as any). Loud music and effective jump scares ensue as Quinn's clueless family try to deal with the problem. If only Elsie could hurry up, beat her own personal demons (both literal and not) and come save the day. No, really: hurry up. For all the jump scares and screaming, Insidious 3 is only interesting when Lin Shaye (and, to a lesser extent, her ghostbuster buddies) is around. Hers is a great role, giving the genre actress plenty to wrap her teeth around. I (just about) remember Patrick Wilson doing well enough when faced with the same situation in Insidious, but Shaye has him beat, like a spooky John McClane faced with Paul Blart Mall Cop: she's the real deal. Which makes me wonder, now I know this is a prequel, why they didn't just send Lin Shaye in to deal with Darth Maul.* 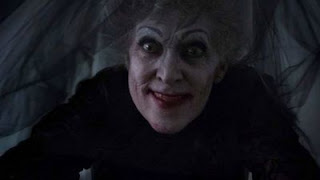 Being the only thing I am likely to remember about this film in a week or so.

This film of two halves - one dullish supernatural horror, one kick-ass Die Hard in the Nether Regions movie - is surprisingly smart and inventive at times**. It has a great star in Lin Shaye, and plenty of good villains in its various demons. While the story is nothing special***, it's pulled off with enough Blumhouse sheen and style that those who lap this sort of thing up should enjoy it well enough.