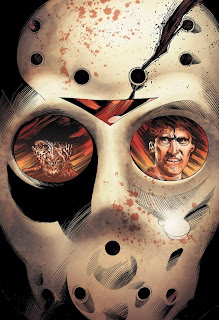 
The first few story arcs aside, Dynamite Comics’ Army of Darkness was a disappointment. And up until recently, Nightmare on Elm Street and Friday the Thirteenth comics were hardly a guarantor of quality (saying that, even the recent Elm Street comics kinda suck paedo balls). Still, hopes were high when Freddy vs Jason vs Ash was first announced. A comic-book sequel to 2003’s Freddy vs Jason, it promised to be a great big fanboys’ wet dream. It was easily my most eagerly anticipated comic event of last year (save, perhaps for Garth Ennis’ final arc on The Punisher, but I digress). And then it arrived. Well, did it live up to expectations?

Well, it could hardly have gone wrong. In my eyes, Kuhoric and Craig (the writer an illustrator, respectively) could have taken a massive, sweaty dump on the page… and I’d have lapped it up like a dog. Freddy vs Jason vs Ash provides everything you’d expect from such a title… but not much more.

Taking a less fanboy-esque stance on the thing, you can see how some might say that FvJvA is a bit, well, shite. The story’s hardly imaginative; Freddy, hankering to give himself some really nasty powers, is after the Necronomicon. To accomplish this, he sends Jason to fetch it. Into the fold comes Evil Dead’s Ash who also wants the Necronomicon; presumably to ensure it doesn’t fall into the wrong hands. Things go tits-up when Jason refuses to play ball, Ash refuses to die, and Freddy just acts like an arse about everything.

Most of the action consists of homages to the three respective franchises. So you get to see Ash lop of his hand (again) and a virtual replay of Freddy vs Jason’s climax, only with added Ash. It’s pretty fun to see set-pieces like that revisited, but too often it feels lazy and in place of any real action. And, once more, this feels more like a Nightmare on Elm Street story with added guests, rather than a combination of three mighty franchises.

Still, there’s a high bodycount, and a fair amount of gore and violence. For the most part, it’s illustrated with gusto by Jason Craig. And then it reaches issue three. Suddenly, the art takes a real dip in quality. It’s like Craig’s rushing to meet the deadline; or as if he just couldn’t be arsed with putting any more effort into things. Which is a shame, because the first issue is beautifully illustrated.

It’s hard to knock something such as this, though. Freddy vs Jason vs Ash is unlikely to ever be realized on the big screen now, so I’ll be happy with whatever I can get.