10. The Gingerdead Man 2: The Passion of the Crust 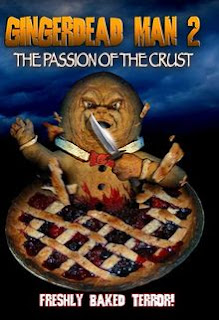 It's your Horror Review Advent Calendar.
25 Christmas themed movies.
Ho, ho, ho.
Director: Silvia St. Croix (2008)
Starring: Joseph Porter, Kelsey Sanders, K-von Moezzi
Find it: IMDB
The first few minutes of this sequel are far more entertaining than the entirety of The Gingerdead Man. It's a montage that consists of footage from the first movie, narrated in the style of a fairy tale. It actually makes The Gingerdead Man look like a film worth watching. It even looks tolerable.
After this uncharacteristic highlight for the franchise, The Passion of the Crust becomes a slightly different variety of intolerable. The story takes place on a film set, where Kelvin Cheatum (Moezzi) is struggling to keep his father's failing studio afloat. The Gingerdead Man (not Gary Busey) is delivered to the studio amongst a box of baked goods. As Kelvin escorts dying fan Tommy (Porter) and carer Heather (Sanders) about the place, The Gingerdead Man picks them off, one by one.
Like most movie-in-a-movie horror features, The Passion of the Crust feels self-indulgent and obvious. I resent the implication that all horror critics are angry virgins who live in their mothers' basements (presumably alongside Frank Miller's Occupy protestors). Well I live in my mother's attic - in your inaccurate face Gingerdead Man 2. "Never listen to critics," the narration grumbles, "those arseholes are lame." Not as lame as The Gingerdead Man, we ain't.
It's a funnier movie than the original bit, less boring and with more screentime for the titular Gingerdead Man. They're the same sort of improvements as made in Jack Frost 2. It doesn't manage to be as funny as Jack Frost 2, but at least it aims for something beyond silly baking puns. Although it does end on a "that's the way the cookie crumbles" joke, the finale is dementedly genius, a glimpse at what the franchise should have been.
Gingerdead Man 2 is half-baked stupid nonsense. Nothing makes me feel an Old Scrooge like failing to enjoy a film about a homicidal gingerbread man. Although, after watching both movies back-to-back, I do have the strangest craving for gingerbread. Hold the Busey.