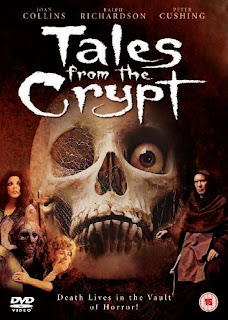 It's your Horror Review Advent Calendar.
25 Christmas themed movies.
Ho, ho, ho.
Director: Freddie Francis (1972)
Starring: Joan Collins, Chloe Franks, Martin Boddey
Find it: IMDB
A man is quite happily reading his newspaper one merry Christmas Eve when a disconcertingly sexy Joan Collins walks in wearing a stupid hat and bludgeons him to death. The man is her husband and Joan is hoping to claim his life insurance by murdering the poor chump. As insurance scams go, that one's even older than burning down your own house. I guess screwing insurance companies over was easier in the 1970s. Still, Christmas Eve is a pretty shitty time to be murdering someone. Especially when you have a young daughter upstairs. Little wonder Joan ends up topping off Santa's naughty list.
Whilst disposing of the body, Joan hears on the radio that a serial killer has escaped from a local lunatic asylum. Moments later, this psycho Santa arrives at the door. But poor Joan can't call the police because she has a dead husband bleeding all over the carpet. On lockdown from scary Santa, Joan concentrates on cleaning the mess up. She doesn't count on stupid daughter Carol letting crazy mister Claus in the house. Joan Collins is strangled to death by creepy Kris Kringle and wee Carol is left orphaned on Christmas Eve. Heh, Carol. Christmas Carol, geddit.
A ten minute tale from the Tales from the Crypt movie, ...And all through the House is perhaps the creepiest story in the film (although Peter Cushing's Poetic Justice is the real highlight). It's simple but very effective, with a haunting twist. Particularly chilling is the use of Christmas carols playing on the radio throughout, even during Joan Collins's eventual murder. The killer is understated. Where the 1989 television remake had Larry Drake in fake teeth and heavy makeup, our murderer here could be any department store Santa or fancy-dress dad.... and that's a lot scarier than even Larry Drake. And I love me some Larry Drake.