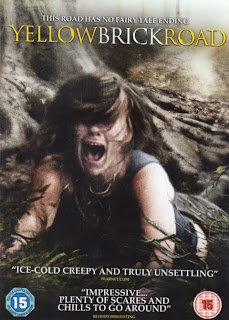 Directors: Jesse Holland, Andy Mitton (2010)
Starring: Cassidy Freeman, Michael Laurino, Anessa Ramsey
Find it: IMDB
The most terrifying thing to come out of Oz since Michael Jackson's Scarecrow. YellowBrickRoad is like The Blair Witch Project crossed with The Evil Dead. A gang of aspiring documentary makers investigate the disappearance of a small town's population. In 1940s' New England, the villagers of Friar wandered off into the hills of New Hampshire. They were never seen again. Given the movie's title, I was expecting to find a tribe of man-eating Munchkins, but YellowBrickRoad delivers something entirely creepier. There is a Scarecrow though, briefly. 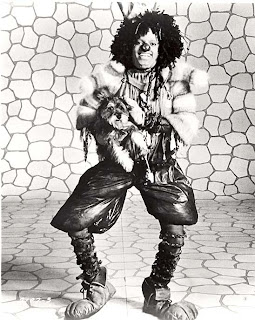 Not that one.
Led by Teddy (Barnes) the filmmakers follow the villagers' supposed path into the hills. Again, another lie on the title's behalf. The road isn't yellow. It's not even a road. This is like The Hills Run Red all over again. YellowBrickRoad takes a while to warm up. For the first twenty minutes, it's nothing special; all ignorant villagers and smug kids. But then, as our protagonists reach the point of no return, YellowBrickRoad starts to get a little bit special.
From beyond the hills, they start to hear music. 1940s' dance hall style music with seemingly no source or explanation. The further they travel, the more the road starts to mess with their minds. They begin to turn on each other for the silliest reasons. Harsh words are exchanged and limbs are lost. It's a suspenseful movie with a great atmosphere and concept. The later scenes in the movie are genuinely unsettling. As two of the ill advised idiots begin munching on poisonous forest berries, YellowBrickRoad becomes a superior Shrooms. Trippy and terrifying at the same time, it's properly "far out" (that's what you kids say these days, isn't it?)
The ending won't be to everyone's tastes. There's a sense of bathos that one could liken to finding a wizened old cretin behind the curtain at the end of The Wizard Of Oz. I enjoyed it in a David Lynch kind of way, although it does feel a little anticlimactic.
No lions or tigers of bears, but this YellowBrickRoad is still one worth following. Oh my.