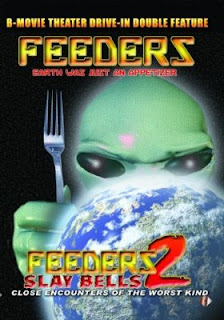 
I had no idea that there was a Feeders 1. After watching this sequel, I'm vaguely curious. More than any other movie I've watched on this Advent Calendar, Feeders 2 is the biggest surprise. I loved every moment of it. Feeders 2 has itself a merry Christmassy theme, with the titular aliens invading Earth during The Most Wonderful Time Of The Year. It's up to Santa Claus and his Elves to save the day. Really. A handy opening montage recaps the story of the first film.

I don't know what I'd been eating, but I did a dark green shit once. Too much information, I know. But the aliens in Feeders 2 are the spitting image of that green toilet trout.  Maybe they should have called this film Close Encounters of the Turd Kind. They're the worst looking aliens I've ever seen in a film. There's little consistency - sometimes they look like poo, other times like pipe cleaners stuck to a  ball of sage & onion stuffing. They sound annoying too, screeching for every moment they're onscreen. At first it's quite effective, but it soon grates. That this is the film's biggest problem is a stunner. I expected Feeders 2 to be unwatchable. But it's quite the opposite. 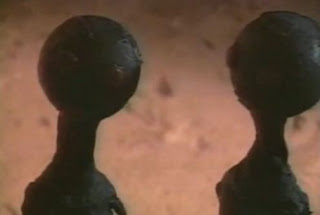 Everything is hypnotically bad, from the crappy aliens to the music and acting. That acting - maybe purposefully bad, but I doubt it - is like Napoleon Dynamite, all stilted deliveries and vacant stares. The children are actually better than the adults. 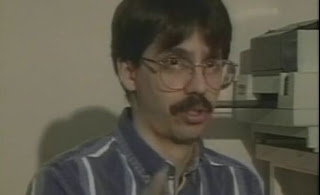 The music is utterly fantastic, all elevator muzak recreations of 'Oh Christmas Tree', 'Jingle Bells' and 'Greensleeves'. Its rendition of Greensleeves sounds like an early mobile phone ringtone. I'll be hearing it for the rest of my life on the soundtrack to my wettest dreams.

Just as it begins to droop at the halfway mark, Santa turns up and is attacked by the aliens. I physically did a LOL as an alien attached itself to an Elf's face. It's made even better by the fact that the Elf is so obviously just holding a doll to his face. It's a terrible movie, but I loved every moment of its surreal stupidity.

For what it is, Feeders 2 is quite impressive. Obviously it doesn't take itself too seriously (it's Santa Claus fighting aliens) so you've only yourself to blame if you watch it expecting something good. It's almost competent though, which I honestly hadn't expected. I actually preferred it to Peter Jackson's Bad Taste. Which is a symptom of my own Bad Taste I guess. Feeders 2 is a close encounter of the best kind.

Email ThisBlogThis!Share to TwitterShare to FacebookShare to Pinterest
Labels: 2011 Christmas special, aliens, So bad it's good