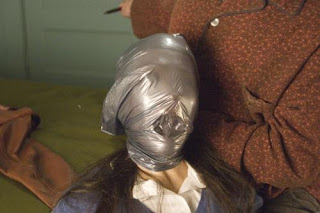 
Better than you'd expect it to be. Much better than the Prom Night and Sorority Row debacles, which I didn't think it would be. Black Christmas doesn't entirely besmirch the original piece's name. It stars Mary Elizabeth Winstead who is literally amazing in literally everything (she was the best thing about The Thing, even better than The Thing itself). There's even a bit of gore and some faintly disturbing scenes of cannibalism and biscuits. And yes, the movie might, but I'm not calling this Black Xmas. 'Xmas' isn't a word. You don't call him Jesus X, do you?
Black Christmas follows the original movie's template, having a sorority house being stalked by someone who may or may not be an escapee from a lunatic asylum. I love asylum escapee horror. It's delightfully retro. Some impressively cruel and creepy scenes are hidden amongst the chaff. I particularly enjoyed a bathroom scene in which a hidden eye spies upon one of the drunken girls. The sleazy pupil staring through a hole in the floor is a bloody chilling bit of imagery. Once more, the bin liner kill is the most memorable moment in the movie.


Aside from The Winstead, the acting elsewhere is perfectly fine. Michelle Trachtenberg is in this Black Christmas, but try to forget about that; just like you forget about those seasons of Buffy she ruined. Katie Cassidy is in it too, playing out yet another movie that should have starred John Saxon in a rollneck jumper.

If you only watch one seasonal horror called Black Christmas this festive period, then it should obviously be the one that stars John Saxon. But if you're planning a seasonal feast this holiday season, Black Christmas '06 might as well be on your list.