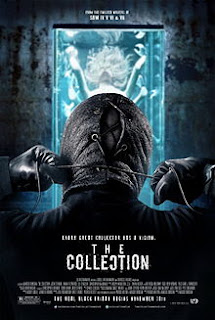 In my review of The Collector, I had a good old whine about the state of modern horror. Coming at the tail end of the whole torture tripe Zeitgeist, it was a surprisingly good horror film marred by a number of silly contrivances and a wholly predictable ending. Oh, that ending. A self-consciously cynical, sequel-baiting ending that anyone who'd ever seen a horror film before in their life would have sussed out from the moment that bloody red box appeared on the scene.

That sequel is here with The Collection, in which the Collector returns to add a few new assholes to his collection. Stewart returns as Arkin, the unfortunate would-be cat burglar added to the Collector's box set the last time around. Escaping after the Collector attacks an underground rave (thereby rendering my earlier rant redundant) Arkin finds himself free, at last. But in the very best of horror movie traditions, his ordeal is barely over before he volunteers to go toe-to-toe against the Collector again. For the Collector has kidnapped a pretty young rich girl (Fitzpatrick) and her daddy's mercenaries are out to recover her. Led by Lucello (the great Lee Tergesen) Arkin and the mercenaries enter the Collector's lair. Because, y'know, calling the police from the doorstep was apparently not an option. Collecting ensues.

The Collection is more or less a straight redo of its predecessor, and feels less original and interesting because of that. With its armed mercenaries wandering around the house getting picked off one by one, The Collection is a cross between the first Resident Evil film and Saw. There are even zombies, in the shape of the Collector's brainwashed victims, who attack the interlopers like slavering attack dogs. There are some cool traps and brutal gore gags, but too much of The Collection is like a replay of the original film. And there are at least three too many incidents of our heroes running into a room to rescue a screaming, distressed victim, only to discover that it was a trap laid by the villain. Frankly, some people deserve to be locked up in suitcases and tortured relentlessly by a twinkly-eyed man in a luchador mask. Yes, by that, I mean stupid people. I'm suggesting that stupid people should be locked up in boxes and tortured. But only mildly so. I'm not a complete psychopath. 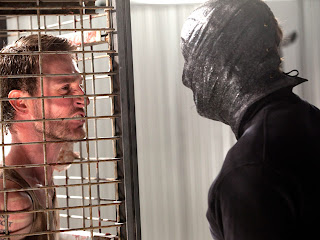 Where it really redeems itself is in the ending. While it's by no means original and certainly not great, it is less predictable than the original movie's, and fairly satisfying. You can probably extrapolate a spoiler from that if you try hard enough, so stop thinking now, people. There's also the opening thresher sequence (similar to the opening of Ghost Ship), Josh Stewart's adorably sad-looking face, and a number of fantastically satisfying fight scenes.

The Collection is a decent sequel packed full of enjoyable splatter, likeable characters and a truly memorable villain. It ends, once more, with the suggestion of a sequel, but we can probably do without that one. Not unless they call it The Collectables, which I would genuinely think brilliant.