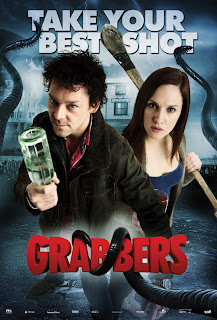 Ireland's number one contribution to the world of cinema (aside from Colin Farrell): some feckin' great swearing. There's no script that, with the addition of a few 'fecks' and 'gobshites', I won't be guaranteed to love. Except for Mrs. Brown's Boys. Fuck that noise. There's also a film I saw once about a horse and Tayto crisps, but I can't remember what it was called and I'm not entirely sure I didn't dream it one night after eating too many Tayto. Answers on a postcard if you have any clue what I'm talking about, because I sure as feck don't.


Irish swearing meets slithery sci-fi horror in Grabbers, an extremely likeable Irish hybrid of Slither and Attack the Block. I'm not going to says it's like Father Ted though, because I'd only be saying that because it's funny and Irish. When nasty tentacled aliens invade a small island off've the coast of Ireland, the only way to settle their hash is to get well and truly obliterated drunk. That's my kind of alien invasion. Some proper belly laughs are to be had at the expense of the trolleyed locals attempting to fend off these slimy, 'orrible aliens.

An alcoholic cop and his partner attempt to arrange a piss-up in a brewery. Well, in a pub. With the help of the local landlord, (another) alcoholic and scientist (not all the same person. Blame my shitty sentence construction) they must band together to save Erin Island from the alien onslaught. That the characters are all so likeable makes the film a joy to watch. It's warm and sweet and funny, but not afraid to lop someone's head off when the dramatic stakes need raising. While the romance between the two leads is predictable, Coyle and Bradley just about pull it off. No, not like that. I said romance, not pornography. The tentacled, almost Lovecraftian aliens look the part, although they are secondary to the characters and the humour.

Even Being Human star Russell Tovey isn't too annoying, although his method of acting does still seem to rely too much on weird shrieks and odd noises. His drunk acting is funny to behold though. It's impressive that, with such a large cast in a relatively low-budget film, the drunk acting is pretty good. Shit drunk actors are a pet hate of mine. As is Mrs. Brown's Boys. One point doesn't have anything to do with the other - I just wanted to re-iterate how much I hate Mrs. Brown's Fucking Boys. Even worse: those stupid fucking Internet memes people keep posting on Facebook which are just a picture of that stupid pricking arsehole saying how useless men are, or some such cliched bullshit. 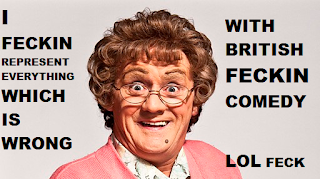