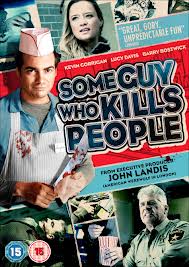 Not nearly enough people, he doesn't. You can't come up with a great title like that and then not have some guy killing a shitload of people. Even worse, you can't have a great title like that and then be a surprisingly touching movie about a father reconnecting with his estranged daughter. Even worse(r) than that, it's like a romantic comedy at times. I haven't been this disappointed since Tyrannosaur. Where's my fuckin' dinosaur, Paddy Considine?


Kevin Corrigan is Ken Boyd, an ice cream salesman who has only recently been released from a mental institution after a traumatic incident in his past. Ken likes to relax by drawing violent cartoons in which people he doesn't like get gruesomely murdered. But then they start showing up, actually dead, as depicted by Ken. At the same time, the daughter he never knew existed shows her face at his ice cream shop, trying to forge a relationship with the father she never knew existed. Begrudgingly, Ken agrees. It's a good job, since Some Guy Who Kills People is much better at the sweet Kevin Smith style comedy than it is the horror or thriller stuff. By the time Lucy Davis (from off've The Office and Shaun of the Dead) shows up, the film is in full-on romantic comedy mode. Davis even seems to be doing a Hugh Grant impression throughout, all affected 'ums' and 'ahs', very English and socially awkward. She's a bizarre presence, although she does wrinkle her nose in a fairly adorable manner.

Talking of adorable: Amy Gade as Ken's daughter is the standout performance. She's a talented kid - funny, sweet and not at all annoying. Corrigan is good as the disturbed, shy Ken, but the supporting cast tend to steal the limelight every time. Karen Black is ace as his mother, while Barry Boswick is very good as her suitor and town sheriff. As a human drama, it's very good. As a horror film, it stinks.

Some Guy Who Kills people is not the film you might expect it to be. But that's fine, there's plenty of horror films about some guy just killing people and doing nothing else, anyway. There, I could be talking about ninety percent of the slasher subgenre already. Sometimes it's nice to take a break and watch something saccharine and cuddly and nice. Although I would have liked to have been warned.