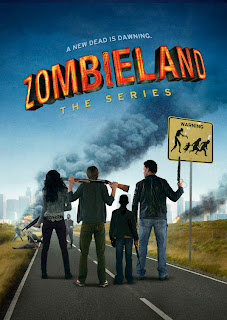 The Walking Dead a little too depressing and gory for your crybaby sensibilities? Have no fear, for the Zombieland TV series is here to show the lighter side of the zombie apocalypse. A sequel to 2009's movie, this pilot picks up not far on down the road. We rejoin Columbus, Tallahassee, Wichita and Little Rock, attempting to survive in a world overrun by zombies. No eyeball gouging or limb removal (so far) for this merry band of misfits though - Zombieland: The TV Series is more akin to My Name is Earl than The Walking Dead. 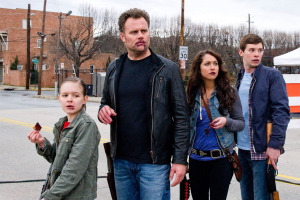 Fans of the movie will be disappointed to learn that none of the actors or actresses have made the transition to the little screen. In the case of Jesse Eisenberg, that's no big loss, but when you consider that Woody Harrelson was the best thing about Zombieland, the series has a bit of an uphill struggle on its hands. And Emma Stone, of course, will always be missed, in everything (even in movies and series she had nothing to do with in the first place). While Tyler Ross is a good fit for Columbus (in a Michael Cera sort of way), Kirk Ward is no Woody Harrelson. It's as though they didn't even really try.

And that's perhaps for the best, since a bad impression of Woody Harrelson would have potentially been even worse. Ward is amusing in his own way, but doesn't really have time to give his own approximation of the character. At the moment, everyone is in the shadow of what came before, and half an hour isn't long enough to do anything about that. It does a great job of capturing the movie's atmosphere though, with many of the same tricks and ideas at play. Returning are the little on-screen 'rules for survival' and 'zombie kill of the week' bits. They're all very welcome. The plot, flimsy as it is (the guys look, unsuccesfully, for fellow survivors) serves as a nice re-introduction to our heroes. The funniest joke is a moment where Tallahassee calls Columbus "Zuckerberg." The Social Network, geddit.

I genuinely hope that Zombieland: The Series does well. This pilot is funny, comically gory and likeable. The Walking Dead may have the monopoly on TV zombies at the moment, but that shouldn't mean that we can't still have a laugh elsewhere at their expense. Frankly, moody Rick Grimes and his chums could do with lightening up a bit anyway.