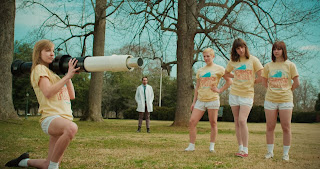 Eagle-eyed visitors may notice that I rarely use The Horror Review Hole to promote anything, other than myself. I once received a snotty e-mail from a PR dude, once, because of my whiny (ish) review of Saw VII. He had gone out of his way to send me a review disc, but still, fuck Saw VII.

I'm even worse with movie news, in that people ask me to support this, or share that, and I generally don't, because dinner is ready, or Coronation Street is on (Eileen is going to Egypt this week), or I'm drunk. The one exception I'll make, every time, is for The Taint. 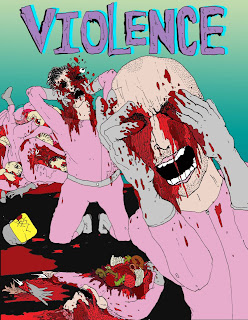 I first viewed The Taint in 2010 - still fairly early days for me and my reviewing of stuff. Spoiler: I loved every moment of that strange, stupid, dirty picture. I've seen mountains of no-budget shit since then, but The Taint has stayed with me. I was tainted. It's since become legendary in my circle of friends, in that I made every single one of them watch it as soon as I realised how awesome it was. I've been to journo' screenings of Evil Dead, The Hobbit and Mama. I spoke to Robert Englund and even met Eli Roth once. But The Taint is my favourite free thing I have ever seen or done. That may sound like hyperbole (and braggartry) and it probably is (Robert Englund is an awesome dude) but I fucking love The Taint. This is a beautiful movie in which a man, draped in an American flag, zooms around on a skateboard shooting Misogynists' gigantic erections off. My friends and I still shout "Noo-oooo! She was so hot!" every time a pretty girl dies in a horror film. Ahem. Gushing over, now for the other thing.

Drew Bolduc is back, with Science Team. While it looks very different to The Taint, colour me intrigued.

You can support the film at Indiegogo and Facebook. I would urge you to do so. More on Science Team as we get it.