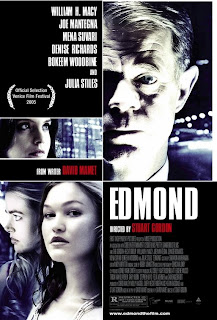 Director: Stuart Gordon (2009)
Starring: William H Macy, Mena Suvari, Julia Stiles, Jeffrey Combs
Find it: IMDB
I recently lost my job. It wasn't my fault; Birmingham City council closed down the shopping centre where I work and hoofed the lot of us out unceremoniously. But it's fine - I hated that job and everything about it except for one or two of my colleagues (the ones I really hated being a fat racist Viking and a closeted paedophile who talked about rape all the time). Actually, I'll exit the parenthesis for now, because I'd like to share a couple of stories about those two particular characters. The Racist Viking didn't believe in black Welshmen and had some very interesting ideas concerning hospital cleanliness.
"Ban all of the Asians."
"Pardon?"
"Their beards are unhygienic. Shouldn't be allowed in hospitals."
Indeed. But he was an imbecile. His racism was just another aspect of that. He thought that Night Of The Living Dead was directed by a man called Johnny Ramirez and finds Family Guy funny. I rest my case. The rapist slash paedophile once had this conversation with me:
"If you had a time machine..." he started.
"Oho," I looked up, sensing a nice game of hypothetics.
"And could go back to any period in time..."
"Go on..."
"...who would you rape?"
"Pardon??"
"You'd never get caught. Ever. Who, me? Officer, I wasn't even born at the time. I think my choice would be Marilyn Monroe." Then he made a high pitched noise that sounded a little like 'eee-eeee' and went back to picking his armpits. The rapist slash paedophile also finds Family Guy funny. Just sayin'.
And that's why I was glad to leave that particular workplace. Also, they paid me a ridiculously large amount of money to go. I was effectively being paid to leave a job I loathed anyway. During my redundancy, I watched Stuart Gordon's Edmond for the first time. Watching Edmond, I was even more glad to be going, since I could really see where that cat is coming from. Except for the murders. William H Macy is Edmond, a middle-aged professional facing the mother of all midlife crises. Rather than buy a flashy car or leather jacket, he leaves his wife (Rebecca Pidgeon) and sets about unravelling all over the streets of New York, really annoying everyone he meets along the way.
Edmond is Falling Down remade for a new generation. Where Michael Douglas was aggressive and angry all over the place, William H Macy is confused, scared and doesn't understand the world in which he lives. Wandering through New York, he encounters a series of equally lost and confused characters, all played by very interesting actors and actresses. I'd never been a fan of Mena Suvari until I saw Gordon's Stuck, but she's good in this too - playing a prostitute with whom Edmond hilariously attempts to barter. Julia Stiles pops up as a waitress enchanted by Edmond's odd brand of soul-searching, and there's even a lovely cameo from Gordon regular Jeffrey Combs.
Edmond isn't a horror movie or even a thriller in the traditional sense, but Gordon has constructed a grotesque, seedy underworld in New York city and a confused, Lovecraftian protagonist from Macy's Edmond. Neither hero nor villain, Edmond does some truly terrible things in his movie, but by virtue of being played by William H Macy, he's impossible to hate.
Edmond is a fine movie, balancing existential angst with the pace of a thriller and the tone of a horror movie, all wrapped around a great lead performance from Mr. Macy. It ends surprisingly sweetly, offering hope in the same breath as sodomy. Edmond is dark, terrifying, hilarious and makes me super glad that I was kicked out of left my job when I did.

Email ThisBlogThis!Share to TwitterShare to FacebookShare to Pinterest
Labels: Thriller