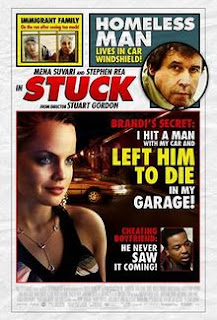 Mena Suvari gets a promotion, goes clubbing, imbibes in much booze and drugs. Goes to drive home. Splatters Stephen Rea all over the bonnet of her car. Panics. Drives rest of the way home, leaving him Stuck in her windshield. Waits for him to die. Horrible cornrows, gangsta rap and violence abounds. An excellent, most underrated piece by Master Of Nasty Stuart Gordon.

A man stuck in a windshield, bleeding out. A girl waiting for him to die. Stuck is a very simple movie. So simple that only bad direction and bad acting could fuck it up. Thankfully, Stuck is directed by Stuart Gordon and stars Stephen Rea and... well, Mena Suvari is actually a revelation here. I'll admit to only ever watching her in an American Pie once, but she's wonderful here. She plays a horrible character with horrible hair who does some really horrible things. There's an effort to make her relateable, but it does turn a bit caricature towards the end. Stephen Rea is sympathetic and occasionally scary. You'll really root for the man to escape from his window. So the character stuff really works. For the gore fans amongst us, there's this: 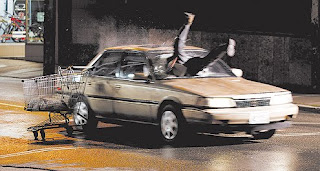 Stuck contains plenty of splatter and some of the worst car carnage stuff since that Cronenberg film where people stick their boners inside car accidents. There's all sorts of vehicular carnage, protracted scenes of grot and grue, stabby bits, pokey bits and slicey bits. There are a couple of typically funny Stuart Gordon fight scenes (I particularly enjoyed the frying pan) and a cringeworthy moment with a pen. Not for the faint of heart, Stuck is a well-made, well-acted little horror movie that does for car windshields what Psycho did for showers. At the very least, it'll make you look both ways next time you cross the road.