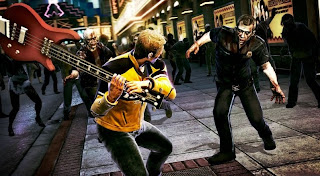 In a city that looks like Las Vegas but isn't Las Vegas, stuntman motorcross person Chuck Greene battles zombies for others' entertainment. A bit like that scene with Asia Argento and the cage in Land Of The Dead, except with chainsaws and motorbikes and cheesy cutscenes. No sooner has Chuck hit the showers than the zombies break out and take the city by storm. Chuck and daughter Katey hide in an underground bunker whilst they wait for the military to arrive. But, as always, there are complications. Katey is infected and needs anti-zombification drug Zombrex every 24 hours. And also, Chuck's been framed as the outbreak's cause. Can he (you) save his daughter, clear his name and survive the next 80ish hours? Or will you spend all of your valuable time dicing and slicing zombies with a lightsaber?
Yes, a fucking lightsaber.
No, it doesn't make the noise. But it's still a fucking lightsaber and you'll spend all of your time chopping zombies to bits with it. Occasionally, if you feel like it, you'll rescue a couple of survivors and battle some psychopaths too. But mostly you'll be hacking zombies up with a lightsaber.
Dead Rising 2 is a free-roaming sort of affair. There's a storyline and objectives, but it's up to you whether you partake in anything, or simply wander aimlessly around battering zombies with a series of ridiculous implements and tools. The sheer amount of weapons and possibilities therein are the game's strongest point. Literally anything you see can be used as a weapon against the zombie hordes. A chainsaw is obviously going to be more effective than a pair of scissors or a dildo, but the option's there if you want it. And the myriad of tools you're given can be combined to double the awesomeness. From nailed baseball bats to chainsaw paddles to beer hats to boxing gloves with knives 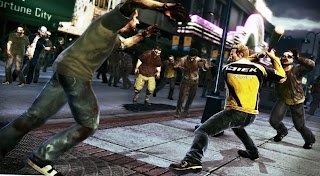 on, Dead Rising 2 delivers the best zombie killing action ever seen in a computer game. It harkens back to Zombies Ate My Neighbour and such filmic delights as Zombieland or Shaun Of The Dead. The emphasis on inventive slaughter by Capcom is a very wise move and will win the game a lot of fans, as will its very George Romero-ish sense of humour.

But where it fails - and fail it occasionally does - is in its terribly cheesy cut-scenes, ridiculously hard psychopath boss battles, underpowered guns, strict deadlines and a map that takes ages to traverse. Its save point system will annoy some, although it's reportedly better than that of the original Dead Rising, and the controls can be a little fiddly at time. The whole thing is nearly derailed by the sheer amount of load screens which pop up at frustrating regularity.
But there's a lot to like and a lot more to love. The kill counter is a lovely little addition. The outfit changes offer much amusement (destroying zombies dressed as a cowboy or in one's grundies brought me hours of giggles) as do the delightfully grotesque characters and boss battles. Yes, they're too hard, but psychopaths such as Chef, Slappy and a PVC chainsaw Pig look quite wonderful. Dead Rising 2 is doubtlessly a little bit broken, but should you take the time to look for and enjoy the fun bits, you'll learn to love it in spite of its unfortunate flaws.
If you've not played it, however, a 're-imagining' was released, starring the original game's Frank West. It's called Off The Record and is a superior game. Ignore this one, and fill your boots with that instead.
Did I mention the FUCKING LIGHTSABER?