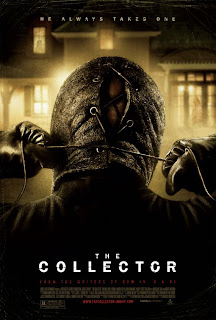 
Not an adaptation of John Fowles' novel of the same name, The Collector is a daft but vaguely sort of good torture guff bit which pits a likeable thief against Michael Myers in a Mexican Wrestling mask. Lots of torture and nihilism ensues, and epic fails all around.


Arkin (Stewart) is a nice-guy-handyman-come-safecracker-thief-type. Down on his luck, and needing $1 million by midnight, he decides to break into an employer's house to steal their really big jewel. Only there's a slight hiccup in the form of 'The Collector' - a serial killer who breaks into families' homes, tortures them, sets up stupid traps and steals one of their number for his 'collection' (he carries around a victim in a box, like Asami in Audition). Being a nice but misguided sorta fellow, Arkin sticks around the house. Mostly because the doors and windows are all locked. But also so's he can try to rescue Mum, Dad, Slutty Teenage Daughter and Little Girl from The Collector. Can he succeed? Can he stay hidden? Can he survive? And why doesn't he have a mobile phone?


The Collector is ostensibly Saw in a house (it was originally penned as a Saw movie) crossed with Home Alone, Die Hard, Panic Room and Halloween. It benefits from having more likeable characters than a Saw movie and an excellent central performance in Josh Stewart's Arkin. The guy is actually really, really likeable. Which I didn't expect. Unusually for a horror flick, you'll emphatically root for Arkin as he attempts to rescue the family and escape the house. This emotional investment makes for a much better moviegoing experience than that Jigsaw bullshit in which you'll hate everyone and only Donnie Wahlberg is good. Plus, there's the best Dog + Bin + Fire related death I've ever seen. At its best, The Collector is extremely tense, gripping and brutal.


That said, it is a very flawed movie. Why did The Collector go to the trouble of setting up a bunch of overcomplicated traps when he already had the family tied up at his peril? How did Arkin manage to sneak in and get upstairs before he noticed the traps that were ALL OVER EVERY INCH OF THE HOUSE? Why does The Collector never wonder how his victims keep magically untying themselves? And the torture is too much. There's already a good concept and great traps. The scenes of protracted and unpleasant torture are unnecessary and overly unpleasant. And the sequel-baiting ending ruins the whole movie for me.

Spoilers now, because I really fucking hate that ending: over the course of the movie, Arkin fails to rescue anyone save for the Little Girl. The Collector is temporarily defeated and Arkin is taken to safety in an ambulance. Nice place to end the movie. Except, no. The Collector rams the ambulance off've the road, kidnaps Arkin and locks him in his little red box. The end. Literally fuck off, The Collector. It's a move which pretty much sums up my biggest problem with the torture subgenre (well, aside from all the torture) - the unremitting, predictable nihilism. Just for once, I'd like to see a movie like this with a 'happy' ending. For variety's sake. Every single Saw movie has ended like this; not to mention its imitators and inspirations. You think because Se7en ended all sadlike you have to do it too? And also, because I'm utterly fed up with seeing movies in which decency and heroism are rewarded with death. I get that the villain has to survive for sequelisation. But what is the point in having your hero fall at every hurdle? The Collector should have had the confidence - or originality - to let Arkin save the family - or at least more than just one of them - and defeat the villain. The moment I saw that stupid bloody box, I knew how The Collector would play out. In the end, The Collector is depressingly predictable and predictably depressing.

Also depressingly predictable: this closing gag. It's a surprisingly good movie. But does it merit adding to your DVD stash? For Collectors only.