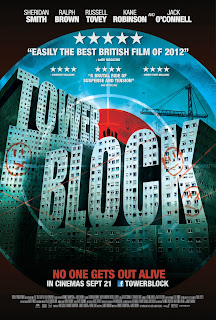 The latest in the increasingly popular subgenre of British horror movies set in and around urban estates and blocks of flats. What can I say - there's a recession on. It's Snoop Dogg's Hood of Horror, Brit flick style. No hoodies, aliens or slasher villains for this terrorised tower block - no, the residents are instead beset by a psychopath with a sniper rifle, picking them off, one by one. Some chavs, an alcoholic, a schoolboy and some more chavs must combine forces to stay alive and fend off the sniper's spiteful advances. It's like Phone Booth, except not set in a Phone Booth.

While not as original as Attack the Block (currently king of the British ghetto horror films) or as vicious as Comedown, this fast paced action thriller certainly packs enough punch for it to stand almost head and shoulders with the rest. Two Pints of Lager and a Packet of Crisps Sheridan Smith star acquits herself surprisingly well as the movie's heroine, while Jack O' Connell is admirably loathsome as chav ringleader Kurtis. Russell Tovey pops up as the flat alcoholic (his squeaky voice in full force) and Withnail & I star Ralph Brown is the most likeable of the bunch, beating up Kurtis when the film needs it most. Nothing ingratiates a character to an audience like punching a massive chav in the head (I'm allowed to say that - I'm working class).

Sadly, unlike its peers, Tower Block is a little too on-the nose. Its acting and script sounds like the work of someone who heard a chavvy sort speak once, but couldn't quite capture the essence. The film's single mother character is truly awful, like Vicky Pollard but without any of the decent acting, comedy or tracksuits. It's as cringeworthy as Lee Nelson's fucking awful Well Good Show (a blatant lie) although it is a little more tolerable than that. If only Lee Nelson's Well Good Show ended with the cheeky chappy being shot in the face with a very expensive sniper rifle, it might actually live up to the title (I'm also allowed to say that, although the sentiment is getting slightly disturbing now).

Tower Block is tense, exciting and enjoyably cruel. It may miss the target here and there, but otherwise, its marksmanship is sound.