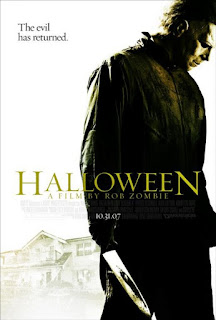 
All the way back in the depths of 2009, I described Rob Zombie's Halloween as a "shit feast". You know how it is, when you first start blogging and reviewing things - you try to be edgy. You read a Charlie Brooker book, and you try to emulate that. Only you're 22, and your idea of being "edgy" is swearing a lot and saying that something sucks the balls of some various animal or other. Bad reviews, they say, are the easiest to write. With that in mind, I found Halloween very easy to review.


It's a bad film - I stand by that much. Is it a shit feast though? Well, while no-one ever needed to see Michael Myers sitting on a kerb crying while his mother pole dances to 'Love Hurts', I can confirm that it is indeed not a 'shit feast'. That whole review was a fuckin' shit feast. What is a shit feast, anyway?

The film kicks off in the depths of the 1980s, where young Michael Myers finds himself in the bosom of a degenerate stepfather, slutty sister and stripper mom (played, obviously, by Sheri Moon Zombie). One Halloween, after murdering a school bully with an exceptionally large stick, Michael gives in to his terrible urges and slaughters his dad, his sister and her boyfriend. The only survivors are his angelic mother (because if you were married to Sheri Moon Zombie, you'd put her in every film you made too) and infant sister. Here's the point where, in my original review, I wrote the phrase "some other stuff happens". Some other stuff does indeed happen, but still, shut up 22-year-old me. You're not nearly as funny as you think you are.

Skip to grown up Michael, now incarcerated in a mental hospital, under the supervision of Doctor Loomis (McDowell) and friendly nurse Danny Trejo. While I would have killed to see a Halloween movie in which Danny Trejo and Michael Myers duke it out for ninety minutes, that's not what we're getting. Instead, Michael breaks free from the asylum and returns to Haddonfield, to find his baby sister. There the story turns into a fairly close adaptation of Carpenter's original movie. In terms of the things Michael Myers does, anyway. Zombie's script turns Laurie (Scout Taylor-Compton) into a foul-mouthed little goon and her friends into foul-mouthed assholes. Everyone in Halloween is foul-mouthed, except for Michael (who doesn't speak) and Loomis (who is too classy for that sort of thing). While it hurts the film that Laurie isn't introduced until quite late into play, it works better if you view it as a telling of Michael's story and not hers. 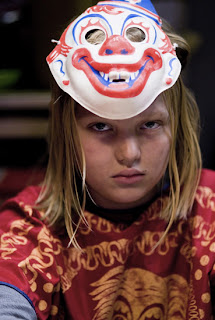 Kill it, as they say, with fire.

This new, extremely vicious Michael Myers is an effective boogeyman, whether he's drowning Danny Trejo in a sink or stealing Ken Foree's overalls. I can't say I was pleased to see two of my favourite cult icons murdered in such a manner, but it does set Mikey up as a force to be reckoned with. I'd like to see kung-fu Busta Rhymes try to beat up on this Shape. Maybe get his leg torn off. I had, in my earlier review, called the acting in Halloween "bad, across the board." It isn't. It's fine. Maybe Malcolm McDowell does phone it in a little, but his performance is worthwhile for his 80s hair and trendy sunglasses alone. Sheri Moon is good too, although she does seem a little crowbarred in. Although if my mom was as sexy as Sheri Moon Zombie, sure, I'd have an Oedipus complex too.

Much to my dismay, revisiting Rob Zombie's Halloween (or Zombieween, as I hilariously called it back in the day) , I didn't hate the film at all. In fact, I actually quite like it. It's a crummy Halloween movie, but a decent offbeat slasher film. There's too much swearing, the characters are annoying and the depiction of young Michael is a definite misstep, but I can't bring myself to hate Zombieween as I once did. Who knows, maybe I'm finally becoming soft, in my old age. Well, that sucks. It sucks massive giraffe balls, is what it does.