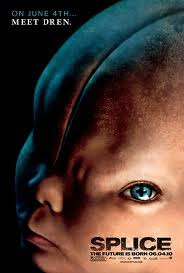 Director: Vincenzo Natali (2009)
Starring: Adrien Brody, Sarah Polley, Delphine Chaneac
Find it: IMDB, Amazon
Like a modern day Frankenstein crossed with Species (only better), Splice sees a husband & wife pair of scientists cross human with animal DNA to create a brand new species. Despite the fact that it's evolved from a slug, they make it wear a dress, call it Dren and make it live in a shed. And because the movie has vaguely erotic aspirations, everyone is sexy. Clive (Brody) and Elsa (Polley) have cool haircuts and dress like rockstars, whilst Dren (Chaneac) grows up to look a bit like Winona Ryder. If Brody spent less time straightening his hair and more time researching his experiments, maybe things wouldn't go as wrong as they do in Splice.
Splice is a refreshing change from recent horror movies in that the bodycount is relatively low, there's no torture and there's at least an attempt to create empathy in the characters. The story chugs along nicely with enough creepy interludes and interesting creature designs to distract from the implausability of an actual scientific institute called 'NERD'. In the Frankenstein tradition, Dren is a sympathetic monster; as sinned upon as she is a sinner. You can feel it building towards a tragic climax and despite a little predictability, Splice doesn't disappoint.
That said, I wasn't really a fan of the characterisation, particularly where Sarah Polley's Elsa is involved. The archetypal broody woman bit feels unnecessary and some of her actions come as hard to swallow come the final quarter. Brody fares a little better as his arc attempts to make him less of an arse, but viewers might end up sympathising more with 'the monster' than Clive and Elsa. What sort of a name is Clive, anyway??* He even has a brother called Gavin. Remember when I said everyone is sexy? In every way except for the names, that is. I have grandparents with sexier names than Clive and Elsa.
Splice is a fun, inventive blend of sci-fi and horror that manages to revive the mad scientist genre without entirely revolutionising it. The scariest thing about Splice? How much I ended up fancying Dren. Yes, even after the final twist.

* Thanks to Jenn from Cavalcade Of Perversions for pointing out that the names come from Bride Of Frankenstein. Note to self: do your research.