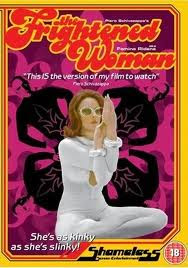 Director: Piero Schivazappa (1969)
Starring: Philippe Leroy, Dagmar Lassander, Lorenza Guerrieri
Find it: IMDB, Amazon
As the cover image above might suggest, The Frightened Woman is a movie so indelibly 1960s that it should be in a museum. Everything from the soundtrack to the costumes (check out that catsuit) right down to its flame-haired lead actress practically scream Austin Powers and free love. And then there's the extremely dodgy sexual politics which are as potentially offensive as they are ridiculous. It's an oddly compelling movie, if you can ignore the faults and some of the sillier bollocks. The dwarf, I thought, was particularly unnecessary. 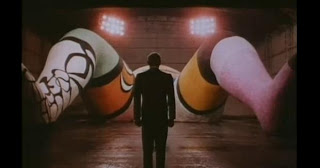 Millionaire philanthrophist Dr. Sayer (Leroy) is a troubled man. Rather than become the crazed crimefighter sort of troubled millionaire, he opts to spend his weekends playing kinky S&M games with prostitutes. When one of his hooker pals calls in sick, Sayer has little option but to kidnap nearby journalist Maria (Lassander). Well, aside from going S&M cold turkey. He drugs Maria, takes her off to his country mansion and subjects her to his stupidest fantasies.
But it's okay because she secretly enjoys it a little bit. Yes really, or at least that's what the movie suggests at first. This first half of the movie plays out in a sleazy and misogynistic manner; glamourising Sayer's tortures and not really ever condemning him. As Maria seems to 'come around' to Sayer's way of thinking, it leaves a sour aftertaste. But to be fair, he does look like Daniel Craig and parade around in his underpants a lot, so you can see why a woman might be persuaded to stick around. Even at the risk of, y'know, being tortured to death.
Beware, here be spoilers. But then there comes an odd twist to the tale. As the Doctor goes to kill his pretty victim, he realises that he doesn't have it in him. Maria is spared, and the pair fall in love. He lightens up a bit and she teaches him the ways of consensual, conservative love. And yet here, as the movie becomes thematically more interesting, it turns downright dull everywhere else. There's a dwarf, a bit of footsie, a knight, some silly 1960s dancing, some sw 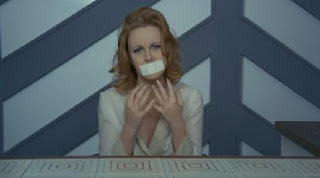 imming, a great big snappy vagina door and a fucking fashion montage. Which would all be fine if it didn't last about forty minutes and wasn't so terribly naff. It makes Adam West's Batman look subtle.
Sayer's redemptive arc and a final twist dents The Frightened Woman's misogyny and explains a couple of plot holes. It even allows itself a few feminist aspirations, in a misguided kind of way. If I Spit On Your Grave can get itself hailed as a feminist masterpiece, The Frightened Woman certainly isn't too far beyond the pale. It's far from transgressive, but at least makes an effort. It's a ridiculous movie and is too self-indulgent at times, but the strangeness and pervasively perverse atmosphere make up for its numerous faults.