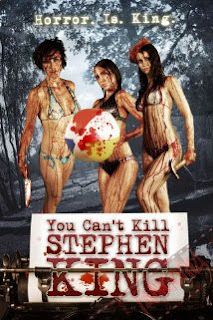 ...Unless you're a van, of course, in which case you can have a damn good go at trying. Ahem. Bad taste, I apologise. Stephen King meets Scary Movie in You Can't Kill Stephen King, a spoof horror film about kids visiting Stephen King's hometown and promptly getting themselves killed there. Because of course they do. The characters are made up of dim stereotypes - there's the traumatised war veteran, the black dude who talks about how black he is all the time, and the girls who have big breasts. That's not me being dismissive or misogynistic, either - the film is completely fixated with the girls' titties. I mean, I love boobies as much as the next heterosexual chap, but, c'mon guys, characterisation is sexy.


None of this has anything to do with Stephen King. Aside from the fact that it's set in Maine and there's a boat named Christine, you'd be hard-pressed to find many Stephen King references in there. The main tune sounds a bit like that of The Shining, I suppose, but even that's inappropriate, given King's well-documented dislike of Kubrick's adaptation. I'm not sure that anyone involved has ever read a Stephen King novel, because there's none of his influence here.

What there is amounts to many ugly stereotypes, unfunny comedy, a cheap titty obsession, and an atrocious rap soundtrack. The Last Lovecraft was equally flawed, but you at least get the impression that those guys actually read and enjoyed the work of their titular author. The writers and directors of You Can't Kill Stephen King got as far as 'titular'. Well, no, they stopped at 'tit'. It's a shame, because it's obviously well-intentioned (no-one sets out to make a bad film, after all) and has a fantastic title. Don't let that fool you though - You Can't Kill Stephen King is a hoary old load of Tommyknockers.