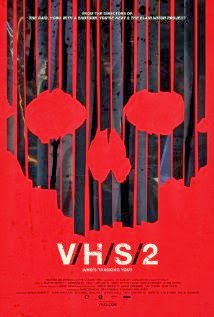 Don't worry - I'm not about to make that stupid "shouldn't they have called it Betamax or DVD?" joke (although I sort of already did, in saying that I wasn't going to). The videos return in V/H/S 2,  a sequel to the popular, not-shit found footage portmanteau horror film. The deal is roughly the same, although it's less misogynistic, and the bookend story has changed. In search of a missing girl, two private detectives binge-watch the video cassettes found at the suspected kidnapper's house. Freaky shit ensues. And also, the most snot I've seen in a horror film since The Blair Witch Project.

Where the original V/H/S had a cool concept but flawed execution (only one or two of the stories were actually any good) all involved seem to have brought their A-game for this sequel. There are six short tales, including the main story, and most of them are incredibly impressive. It gets the weakest out of the way first, with Phase I Clinical Trials being a fun, jump-scare inducing wee ditty about a fellow who gets a video camera implanted into his dodgy eyeball. It's not long before the camera starts picking up a little more than the minutiae of daily life. It's a shorter, louder version of The Eye, with a random bit of sex in the middle. From there, the film picks up pace, and never stops to look back. A Ride in the Park is a fun twist on the usual zombie shenanigans, Slumber Party Alien Abduction is a loud, upsetting oddity (the camera on the dog's head is a clever idea) while Safe Haven might just make the most intense use of found footage I've seen since [REC]. Everything else is very good, but I could quite happily have watched a feature length version of Gareth Evans and Timo Tjahanto's segment.

V/H/S 2 is a vastly improved sequel to a film that wasn't too shabby in the first place. Gory, fast paced and genuinely disturbing in places, it's inventive, exciting and gratifyingly nasty. Where the original movie was a likeable oddity, this follow-up makes me think that there might be real life in the format.