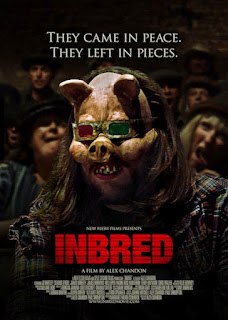 Director: Alex Chandon (2011)
Starring: Jo Hartley, Seamus O'Neill, Dominic Brunt
Find it: IMDB
If there are two things in life that I love which others regularly fail to appreciate, it's the humble backwoods horror movie, and a little soap opera called Emmerdale. Never before have the twain met, until now. Not only is Inbred a little bit like Emmerdale anyway (in so much as it's set in a small country village) but it stars my favourite cast member of that soap opera too - Dominic Brunt, aka cuddly horse traumatised vet Paddy Kirk. Prior to watching Inbred, I was aware that Paddy from off've Emmerdale had made a horror movie, but had no idea that this was that movie. Imagine my thunderous joy when I saw Paddy from off've Emmerdale pop up, wielding a fucking chainsaw, no less.
The plot at first appears to offer nothing special. In fact, I was dreading watching Inbred, so fed up am I with half-arsed backwoods horror films. As two social workers take a van load of delinquent teenagers into the countryside in the hope of getting them to behave, they are beset by the village's contingent of inbred psychopaths. The story is like a cross between The League of Gentlemen (nothing to do with Alan Moore), Severance and 2001 Maniacs. It quickly becomes evident that Inbred is more than your average Texas Chain Saw Massacre rip-off.
Insanely gory, frequently funny and very violent, Inbred is tasteless, crass and often shocking. There are vegetables being shoved places where vegetables really shouldn't go, horses trampling people to death and a truly tremendous amount of exploding heads. Needless to say, this won't be to all tastes. The characters aren't particularly likeable, and too often the victims' acting descends into bouts of ear-piercing screaming and shrieking. Still, the kids are horrid enough that you can enjoy their Murder By Inbred, and the villains are fantastically realised. Pub landlord Jim (O'Neill) is a wonderfully gruff psychopath, and Paddy Brunt looks truly disturbing as chainsaw wielding Podge. Emmerdale Farm is a pretty terrible place to live anyway (a plane literally landed on it once, and a woman was exploded by lightning in a phone box) - Not for nothing do we refer to Emmerdale as 't'village of t'damned' in our house - so it's entirely appropriate that Inbred should feature one of its stars. 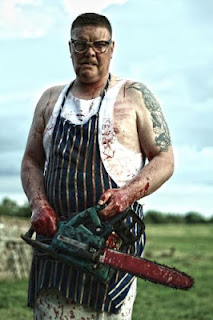 With Pearl not around to keep an eye on things, standards at the veterinary practice went downhill fast.
Imaginative as it might be in places, there are of course clichés. I've not seen a backwoods horror movie in years that managed to avoid breaking out the bear traps, and Inbred is no different. However, it manages to dance around those clichés somewhat, using them in a manner one might not expect. Several plot points and scenes I recognised from the first time around they were done in Severance, but Inbred is more enjoyable than that Danny Dyer afflicted movie. Its sense of fun overpowers most of its flaws. It even imports its own version of Deliverance's duelling banjos in the form of the genuinely catchy 'eeh by gum'. Eeh by gum, it's good.
If you're easily amused, like myself, you can pretend that Inbred is one of those whimsical Emmerdale spin-off movies - that ask things like 'what if the Dingles won the lottery or went on holiday?' - taken to a terrifying extreme. This unlikely contender might just be my favourite backwoods horror movie of 2012. It's violent, funny and more than a little silly. Not sure I'll ever be able to look at Paddy from off've Emmerdale in the same light again, though.