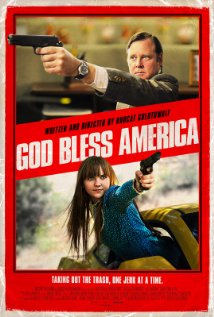 A disenchanted office drone and a teenage psychopath embark upon a brutal killing spree inspired by the things that hack them off with modern life. On their kill list: noisy people in the cinema, xenophobic shock jocks and the stars of My Super Sweet Sixteen and American Idol. In a world in which people still read The Sun and Seth MacFarlane has three shows on television, God Bless America is very timely.

I might live all the way over here in wet, boring England (yes, I just had a cup of tea) but none of God Bless America was lost in translation. We invented Simon Cowell, after all - and our Daily Mail is just as bad as your Glenn Beck. There's a channel called BBC3 that shows Family Guy every night of the week. If that isn't a sign of the apocalypse, I don't know what is. With that in mind, I settled down watching Bobcat Goldthwait's satirical road trip movie hoping to see it set the world to rights.

The dynamic of the film is like Falling Down meets Super (whose protagonist is also a man called Frank). Tara Lynne Barr's schoolgirl psychopath gives a turn so very similar to Ellen Page in the latter film that it's entirely appropriate that Frank (Murray) should dub her 'Juno'. While she is annoying, Barr's energetic performance prevents the film from getting too gloomy. With a very specific target list and modus operandi, Frank conducts his operation much like that other famous Frank, The Punisher. The humour is very black and downright cruel at times, but the film is silly enough that it tends not to stick in the mouth too much. An exception being Frank and Roxy's killing spree at the cinema - given recent events, it's a little too close for comfort.

A spiritual sequel to Idiocracy, the film owes a lot to the work of Mike Judge. Frank acts like a more mildly functional version of Office Space's Milton (and Murray is only a moustache away from looking like him) while the idiots so detested by Frank and Roxy are very Beavis and Butthead. Unfortunately, writer and director Bobcat Goldthwait's script lacks the precision of Judge's writing. By the time the film's fifteenth or so rant came about, I'd had enough. For every genuinely funny line or moment, there's Frank or Roxy giving a tired monologue about the state of the country or explaining why Alice Cooper is so awesome.

Where Super left us in little doubt that Red Bolt had serious mental health issues, God Bless America would have us see Frank and Roxy as heroes or anti-heroes, at worst. Sure, their targets are horrible (watching My Super Sweet Sixteen, I can empathise) but Frank and Roxy are imbeciles themselves.  Frank complains about the state of modern television, flicking through channel after channel of shite. We all feel like that sometimes, but hadn't he ever considered getting Netflix? Nothing like a four-season Breaking Bad marathon to restore one's faith in modern drama. I honestly consider American drama (Breaking Bad, Dexter, American Horror Story, True Blood, etc) to be the best in the world right now. Not a fan? Buy a DVD player. Nobody is making you watch that shit, dude. I agreed with most of Frank and Roxy's viewpoints (particularly the Alice Cooper thing) but their constant whining left me hating them by the end.

There is a difference between a screenplay and a diatribe. This is the latter. God Bless America sounds like the former. If I wanted to hear self-indulgent whingeing, I'd record a podcast and listen to that instead.