IT CAME FROM POUNDLAND II: Saw 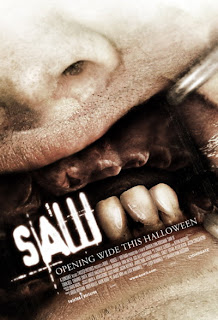 Our semi-regular feature returns with Saw, a movie I didn't really like but couldn't turn down for £1. I've never watched it since buying the film, and probably never will. Still, at a quid, I maintain that it is a legitimate investment. Update: I sold it on eBay for £3.25. That's a lot of profit, given that I always deliberately overcharge for postage and packaging.

Se7en II: Saw stars Cary Elwes as Doctor Lawrence Gordon, a man kidnapped by the mysterious and elusive Jigsaw Killer. Together with a man who can't act and a corpse who can, Gordon is locked in a smelly bathroom and told to hack his foot off if he wants to survive. Meanwhile, other things are happening in the outside world. Wronged copper Danny Glover is on the hunt for Jigsaw, Gordon's wife (Monica Potter) and child (child) have been kidnapped and several unsavoury types fall victim to Jigsaw's little games. Despite the fact that nobody owns any lightbulbs and Cary Elwes sucks in this movie, Saw is a servicable enough little horror thriller type thing. 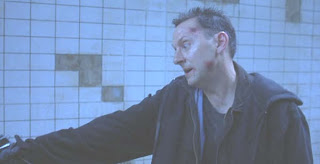 ... and it stars Ben from off've LOST as a man called Zep.

Depending on your view of the movies, Saw has pretty much become tainted by its own sequels at this point - a byword for cheap schlock, seasonal moneygrabbing, lazy plot devices and an insistance on crowbarring Tobin Bell into flashbacks just for the sake of it. 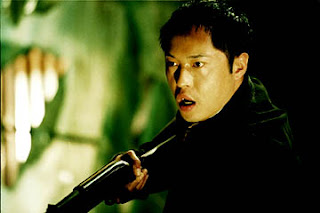 ... and Miles from off've LOST as a man with a fat face


So Saw is a hard one for me to like now. I love (most of) its casting - Danny Glover, Monica Potter and the LOST alumni are good in everything - and the traps are admittedly quite inspired. It is what it is really; a passable Se7en rip-off with a few good twists and a neat concept. But like Freddy Kreuger and those damn cartoony sequels, it's become diluted by its own overexposure. And it's so self-serious that it's almost impossible to like. Whereas you want to see Freddy, Jason, Michael and Leatherface hack up the teens, Jigsaw is an irritating egoist with an overinflated sense of self-importance and whiny disposition. This is a man whose first thought after diagnosis with cancer is to build a bunch of silly traps with which he can torture crackheads and cheating doctors. 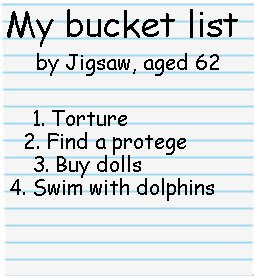 To be fair, if my doctor was as annoying as Cary Elwes is in this movie, I'd probably be tempted to lock him up in a toilet too. The lead performances in Saw are really pretty bad, all snot and overacting. Elwes and the crying photographer bloke are both outperformed by the supposedly (SPOILER) dead body with whom they share their lavatory. Good as Danny Glover is, even he doesn't seem to give much of a rat's ass about the film. Well, he is getting too old for this shit. Next up: Saw In A House with the Wahlberg that's not Marky Mark.