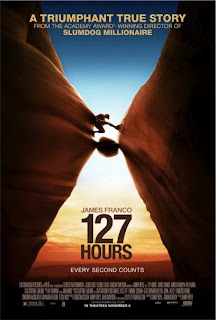 Director: Danny Boyle (2010)
Starring: James Franco, Dwayne Johnson.
Find it: IMDB
Silly outdoors idiot Aron Ralston (Franco) falls down a hole and gets his hand stuck under a rock. The main selling point of the movie being that he cuts his hand off in the end. It's a good job that Danny Boyle knows how to direct a film, because most movies suck when you know what happens in the end. Case in point, Titanic.
Ralston is an excitement-seeker who takes off canyoneering in Utah, alone and without telling anyone where he's going. He's distracted by a pair of hotties (Kate Mara and Amber Tamblyn) who invite him to a party before he runs away again and falls down a hole. He's followed down his hole by a rock (The Rock, almost unrecogniseable beneath all that heavy makeup) what crushes his hand and traps him there. It's really hot and Ralston has very little to eat or drink. All he does have is a handheld videocamera, some climbing rope and a blunted multitool. Not even a Leatherman.
127 Hours is a true story, based on the real life experience of Aron Ralston, who recounts it in his book Between A Rock And A Hard Place (GET IT). People like Ralston miff me royally off, since I used to work in an outdoorsy shop and had to deal with his sort all day. People with a passion for the outdoors are generally quite annoying and arrogant and go around falling down holes and dying outside of abandoned buses, but only when they're not asking me stupid questions about vegetarian shoes and bragging about how many holidays they've been on this year. Aside from Ralston being a bit of a pain in the ass to begin with, it's easy to empathise with his position. It's a great question, too. Could you bring yourself to cut your own hand off with a blunt knife? 127 Hours is like an avant-garde remake of Saw.
Danny Boyle is an expert director, and ensures it's never boring or slow. To be fair, if Boyle can make a film about a guy winning Who Wants To Be A Millionaire good, you best be sure he knows how to make a guy cutting his hand off seem tense. And icky, too. It's not as faint-inducing as its publicity might have you believe, but you'll definitely go "ooh."

Email ThisBlogThis!Share to TwitterShare to FacebookShare to Pinterest
Labels: stuck