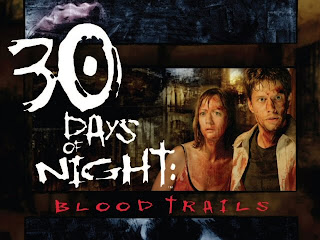 A prequel miniseries to the hit 30 Days Of Night movie, Blood Trails is utterly ruined by its presentation on DVD. Fair enough, I bought the thing in Poundland (for guess how much) but I can see no reason why they'd keep its TV series format and not edit all the episodes together into a semi-coherent film. Each episode is no more than ten minutes long, meaning that every ten or so minutes, you get a 'next time on Blood Trails' and two credit sequences. Even when you just skip the bastards with your remote, it's incredibly distracting. I can remember less about the film or the story and far too much being pissed off.

Blood Trails is about a recovering drug addict named George (Hope), who earns a living by running silly little errands for a covert gang of vampire hunters. He stumbles across a coded message from the vampires, planning something very big on a very specific date. Those who have seen 30 Days Of Night will recognise this as the vampires' attack on Barrow. But (SPOILER) since nobody comes to the rescue in 30 Days Of Night, you'll also know that this information will lead to nobody's salvation. There's about one gory vampire attack per episode, a guy who looks like Harry Knowles bites it, and Josh Hartnett at no point makes an appearance. As an Easter Egg, it's fine. As a prequel or feature in of itself, Blood Trails is inconsequential. The vampires still look and sound awesome, and there are some good moments of nasty violence, but the plot is less original than even Dark Days.

Passable as it might be, it's ruined by its own presentation and rendered more hassle than it's ultimately worth.