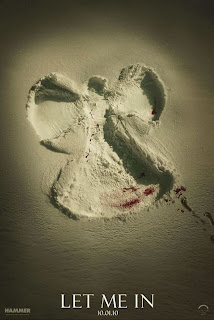 Director: Matt Reeves (2010)
Starring: Kodi Smit-McPhee, Chloe Moretz, Richard Jenkins
Find it: IMDB, Amazon
Thankfully the only thing dumbed down by the Let The Right One In remake is the title. The moniker is clunky and a bit silly, but thankfully doesn't portend the thorough shittiness one might expect from this movie. Its biggest crime, as you might expect, is merely an unavoidable but constantly pervasive sense of pointlessness.
Owen (McPhee) is an unhappy child. His parents' marriage has broken up and he is routinely terrorised by bullies at school. And the weather's always crappy, which is bound to put a downer on anyone. Bonding over a rubik's cube, he meets Abby (Moretz) a kooky young girl who enjoys walking barefoot in the snow and shouting at her useless guardian (an almost unrecognizable Jenkins). But Owen's new girlfriend is hiding a secret. No, she's not a purple-haired superhero; the girl's a vampire.
But you know all that. Because you've seen Let The Right One In. Like the Hollywood Quarantine to Spain's [REC], Let Me In is a respectful, faithful piece that - in theory - is everything you'd want from a modern horror movie. The problem being, you don't know where the original stops and the remake begins. It's hard to praise a movie like Let Me In or Quarantine when the template is there for all to see. Let Me In is almost a scene-for-scene remake with improvements made only on a superficial level.
The things Let Me In does better than The Right One (wait for it, there's a King Pun payoff in the last paragraph) are technical type things. So Not-Daddy's serial killings are better, Abby is scarier, Owen is weirder and the crap CGI cats are gone. However, I actually liked the crap CGI cats. The scene in which the woman is attacked by cats was one of the best things about Let The Right One In. Every movie should have a scene in which a woman is attacked by crap CGI cats. Let Me In has no such scene.
Nevertheless, it's an eminently watchable piece. The performances are all very good - particularly McPhee and Hit Girl. Professional That Guy Elias Koteas and Richard Jenkins bring yet more gravitas to the already heavily loaded table. Director Matt Reeves does a great job in the directorial chair. It's just a shame he chose to lend his talents to such an overtly unnecessary flick.
Let Me In is a good start to the re-emerging Hammer brand. It's a very good piece, and if its subtitled predecessor didn't exist, I'd probably give it 5/5 stars. This is a story worth telling, make no mistake. But if you're going to feed just one vampire love story to your DVD player, please make sure you Let The Right One In.