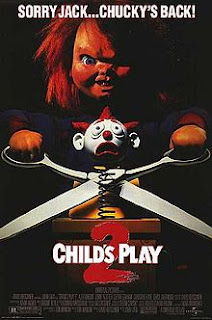 As is bound to happen when you go around telling people that a possessed children's toy tried to kill you, Mother Barclay is immediately committed following the events of Child's Play. Andy (Vincent) is put into care, sent to live with Jenny Agutter and her husband for the duration. You would have thought that ensuring that the kid is sent to a Good Guy free household would be top of the social services' priority, but apparently not: the Simpsons just so happen to have a Good Guy of their very own just chilling in a cupboard. This gives the recently resurrected (again) Chucky the perfect way to infiltrate the house.

Which is a shame, because that spells curtains for Jenny Agutter, and I really like Jenny Agutter. It was her performance in Logan's Run which was instrumental in my first noticing girls (that and Catwoman in Batman Returns and, um, Wendy in Disney's Peter Pan). Jenny Agutter abuse aside, Child's Play 2 is a great slasher sequel. Andy remains the worst thing about the series, but he is sidelined enough by the rebellious Kyle (Christine Elise, looking as though she's escaped from a Nightmare on Elm Street sequel) to be less annoying than he was in the first. While still being quite annoying.

The plan remains much the same as the first - Chucky wants Andy's body, and won't rest until he's taken it. His being constantly distracted by a compulsion to kill everyone around the kid gets in the way though - if he was to just get it over and done with, nice and quickly, the film would be about half as long. Brain of a plastic doll, too.

There's more gore, more swearing and more great voice work from Brad Dourif. It's as good a sequel as A Nightmare on Elm Street: Part 2 was to its own predecessor - good, but a tad derivative. Child's Play 2 is less gay than the former (although there is a scene in which kinky Chucky straps little Andy to a bed). Savour it, for Child's Play 2 is the last genuinely good Child's Play film. It's all downhill from here.