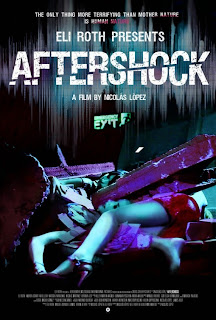 From Psycho through to From Dusk Till Dawn and Hostel, the two-act story is something of a staple in horror films. Starting out as one thing (crime drama/crude sex comedy) and abruptly changing genre halfway through can be a very effective technique. See all of those films I just mentioned (except for Hostel) as your example. Add The Cottage to that list too, then go and watch The Cottage again. Where Hostel fails is in that its first half is intolerable and ugly, filled with characters you hate and an odd reliance on casual homophobia. It may make the second half switch feel more satisfying, but you're still left with a film full of assholes.


Aftershock follows the two-act template to a tee. Obviously, there's not really much way of foreshadowing such an event as an earthquake, so the first real sign of any horror in the film is when the club our pretty young idiots are dancing away in suddenly collapses on their heads. As the city around them crumbles to bits, the survivors take to the streets, where they are beset by more falling buildings, tsunami warnings and gang rape teams. Because society is only ever an earthquake away from certain gang rape.

A stupendously gory and violent natural disaster film, Aftershock is impressively nasty, once it finally gets going. Using practical effects and prosthetics instead of CGI, it looks and feels authentic. Even Eli Roth, playing the character 'Gringo' isn't too annoying. I still wish he'd stop acting forever, but it's his best performance to date. What does become boring, however, is how quickly the film descends into a battle between pretty girls vs rapists. The earthquake itself is nasty enough without having to resort to that.

True story (mild braggartry included) folks: I was lucky enough to speak with actress Lorenza Izzo and director Nicolas Lopez (Eli Roth, too) and Aftershock does none of them (except for maybe Roth) justice. It fails to capture Lopez's hilarious wit, or that bit when Izzo speaks, and you suddenly fall in love with her. Aftershock is a good disaster exploitation film, but not one that registers too highly on the horror movie Richter scale. Kudos, too, for spoiling it all by putting the ending in the trailer. Well done, guys.