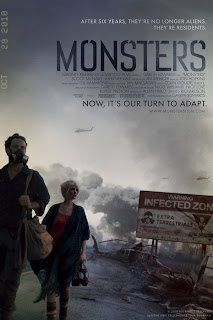 Director: Gareth Edwards (2010)
Starring: Scoot McNairy, Whitney Able
Find it: IMDB, Amazon
SPOILER: There are no monsters in this movie until the last ten minutes, when two giant space Octopuses turn up and kiss. If you want to watch a critically-acclaimed film that makes a statement about immigration and eventually turns into a sweet love story (not the octopuses) then you might find something to like in Monsters. If, however, you just wanna see giant monsters fuck shit up, then I'd advise looking elsewhere. Monsters is less a live-action Monsters Vs Aliens and more a mumblecore version of The Road.
Watch Monsters forewarned with the knowledge that you won't be getting many actual Monsters, and you'll be fine. Otherwise, you'll feel exactly how I felt when I walked into Twilight thinking it was about vampires or when I tuned into Russell Howard's Good News expecting him to announce his retirement/imminent death. 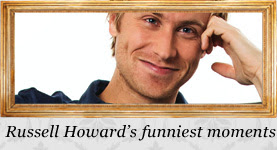 Oxymorons, y'all!
Years after the Earth's invasion by giant space octopuses (localised to a quarantined bit of Mexico) photographer Andrew Kaulder (McNairy) is dispatched by his boss to escort tourist Samantha Wynden (Able) home. With her passport and all of their money stolen, the only way for Samantha to get back to America is via the Infected Zone. Careful though, there be monsters. Allegedly.
If I wasn't so stupid, I could tell you how Monsters is an allegory about Mexican immigrants and such, and ask questions like "who are the real monsters?" But I live in England and my knowledge of American/Mexican immigration issues begins and ends with Machete. Instead, I can whine a little bit about how there aren't any monsters and then when there are monsters, all they do is kiss. I can also admit that I liked the film anyway, because it's well acted by its unfamiliar leads and the depiction of post-invasion Mexico/America is awfully well realised. It's not as good, but it reminds me of The Mist, in that the aliens aren't all that important and you generally care about the humans' plight. It reminds me of Cloverfield if Cloverfield had heart and maybe Skyline if Skyline had a brain cell.
But there are no monsters in this film called Monsters, and that is going to put a lot of people off.

Email ThisBlogThis!Share to TwitterShare to FacebookShare to Pinterest
Labels: aliens