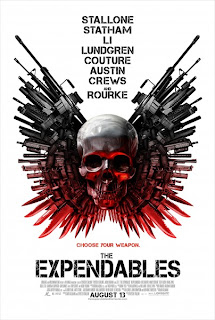 Director: Sylvester Stallone (2010)
Starring: TERRY CREWS, Stallone, Statham, Li, Austin, Roberts, Rourke
Find it online: IMDB
If I was drunk, 13 years old, or a 13-year-old drunk, The Expendables would be my favourite movie of 2010. There's nary ten minutes goes by without something exploding or someone exclaiming macho expletives. Stallone plays Barney, leader of the titular expendables; essentially a group of mercenaries for hire. His team includes knifey Lee Christmas (Statham), Jet Li, Mad druggy Gunnar (Lundgren), Terry Crews and Randy Couture. As you may have guessed, the script doesn't really give us time to learn their names. I'm still not entirely convinced that Crews and Couture's characters even have names. Which is a shame when you consider that Terry Crews is perhaps the most likeable Expendable. Even if his tough guy image is slightly ruined by the Everybody Hates Chris dad speeches going through my head whenever he's onscreen. 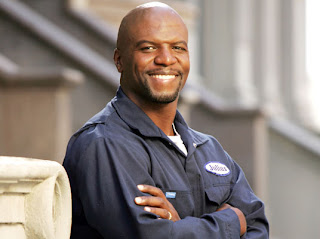 But you don't care about Terry Crews. No-one cares about Terry Crews, hence his name coming second to the likes of Schwarznegger and Willis on some of the posters. Schwarznegger appears for about two minutes, just long enough to declare his lack of interest in the job. Bruce Willis, meanwhile, condenses about 90 minutes worth of smirking into his five-minute cameo. He does, however, tell Stallone and Schwarznegger to suck each others' dicks. It speaks volumes that this is the most memorable line in the movie. There's not even a "he'll be back" joke. Had Willis just decked Schwarznegger or Stallone, that might've won The Expendables a bit of goodwill from this idiot. As it stands, Schwarznegger and Stallone mumble machismo at one another and Willis looks smugger than he has in his whole career. Plus Arnie seems to have forgotten how to speak (even moreso) since his last acting foray. The Church scenes are the mumbliest in a movie full of mumbling. It gives a whole new meaning to the word "mumblecore." 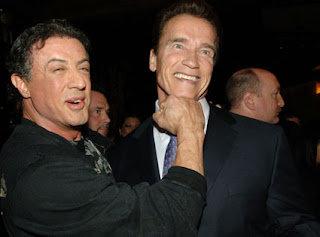 The closest you'll get to any actual Stallone/Schwarznegger action. Probably ever

Faring slightly better is Jason Statham, ostensibly netting supporting actor next to Stallone. For the first forty-five minutes or so, The Expendables is basically The Stallone & Statham Show. Eventually this lets up a bit though, and other hardmen are given their individual chances to shine. Jet Li gets a couple of good rumbles with Lundgren and Steve Austin, whilst Crews and Couture stand around in the background blasting at people with ludicrous guns. Mickey Rourke gets a few short scenes, just long enough to provide a moral message and some guidance for Stallone's lost soul. But there are a lot of missed opportunities. Dolph Lundgren is a lot better than I ever thought he could be, Terry Crews is great and even Steve Austin is quite good. Still not sure why Randy Couture is in this movie though.
Eric Roberts plays it evil, with Austin providing the muscle as his bodyguard. A Lundgren/Austin smackdown is hinted at, but unfortunately never happens. It's still amusing enough watching Stallone pull wrestler moves on Austin, and particularly smile-rousing when Austin clothesline punches the Italian Stallion. There are but two women in the movie (Charisma Carpenter being the most notable) and they exist only to either be rescued or punched by the men in the cast. Ladies and people with discerning tastes, this movie is not for you. 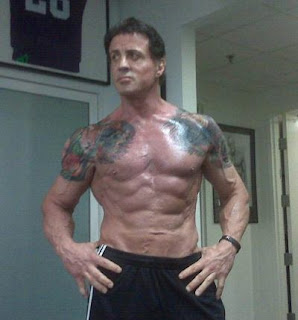 The action in The Expendables is good, but just doesn't have the pizzazz of 2005's Rambo or the knockabout humour of say, Crank or The Transporter. This might sound like a bad review, but it's not - not really. I love the cast. Terry Crews and his shotgun are amazing. Bruce Willis tells Sly & Arnie to suck one anothers' dicks! With all that in mind, The Expendables never could live up to its own hype and expectation, could it? As it stands, The Expendables is little more than a Direct-to-DVD movie with the greatest cast, marketing and hype perhaps ever. It's like Tropic Thunder but with disappointing action instead of disappointing comedy. And like that movie, it'll play a lot better on DVD to the post-pub crowd. At the very least, there'll be a subtitle track.