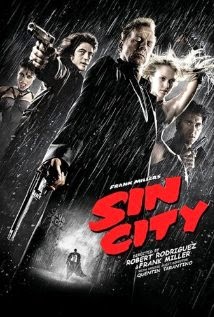 One of the original 'good' comic book movies, coming from a time when most adaptations were Catwoman, Daredevil and Sam Raimi Spider-Men, created when Frank Miller was still a respectable name in comics and before Robert Rodriguez became a parody of himself. With its sequel finally inbound, what better time to pay a return visit to Sin City?

As before, Bruce Willis and Mickey Rourke's stories remain the best, while Clive Owen handles the filler in the middle just fine. It's the sort of movie in which every single man wears a leather trenchcoat, speaks like they've been gargling broken glass and talks... well, just like a Frank Miller character. The women, meanwhile, are either prostitutes, strippers or women of other professions who just so happen to act exactly like prostitutes and strippers. With Clive Owen referring to Rosario Dawson as a 'Valkyrie', hookers dressed like Zorro and half the cast wearing Converse, it's like a fifteen-year old's approximation of 'cool', filtered through Miller, Rodriguez and Quentin Tarantino. Not that there's anything wrong with that.

An exercise in reproducing a comic book as faithfully and literally as possible, Sin City is a resounding success. It's aged surprisingly well, and if The Spirit hadn't so completely stunk, I wouldn't have been surprised to see a whole slew of imitators follow it. Willis and Rourke are fantastic as the honest cop and the honorable thug, respectively, while Owen isn't bad as Dwight (to be played by the altogether better Josh Brolin in the sequel), with a whole host of great performances filling out the ranks. Nick Stahl and Elijah Wood are the best of the bunch, although there's something for everyone, from Rosario Dawson to Jessica Alba, Michael Madsen and Benicio Del Toro, to name a few.

Sin City is unashamedly daft, full of men jumping off rooftops like Batman and explosions which merely blow people over rather than, you know, up. Taken seriously, it's quite terrible and probably a little offensive. Viewed in the spirit (pun unintended - that's not an encouragement to watch Frank Miller's awful movie), it's a gleeful embodiment of Frank Miller's work at its gritty, pulped best.