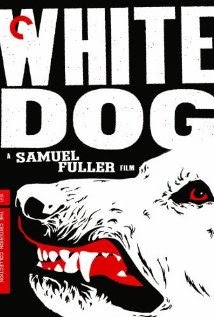 We've all been there - it's a peril that goes hand in hand with meeting new people. You're chatting with a new colleague or acquaintance; you're getting along rather well - maybe even making plans to meet in the pub later for a couple of bevvies - and then boom, there it is. The racist comment. "I think you should vote like me," the hideous racist Viking, as I like to refer to him said, "you should vote BNP." Ew. And for the record, fucking no. He then went on to explain his belief to us all that Indian men should be banned from hospitals. Because of their unhygienic beards.


It's a problem Julie Sawyer (McNichol) knows only too well, adopting the German Shepherd she accidentally runs over late one night. Cuddly, goofy*, shaggy*, loyal and utterly lovely-looking, it doesn't take White Dog (he never gets a name) long to ingratiate himself into her life. At around the point he saves her from a would-be rapist, Julie falls in love with her dog. Only, it emerges, White Dog has serious issues. White Dog is a fucking racist. Trained by his previous owners to attack black people, White Dog has a serious aversion to people of colour; going so far as to murder one innocent truck driver as he goes about his rounds late one night.

Desperate not to lose her new best friend, Julie brings him to a Hollywood trainer, hoping that she can un-teach an old dog his antisocial tricks. If Keys (Winfield) takes his mission personally, it's because he sees it as an opportunity to show that racism can be un-learned. And also, you know, because he himself is black, and White Dog is a fucking racist.*

Well-meaning and powerful (if flawed), White Dog is a typically eighties exploration of racism and civil rights issues, rarely beating about the bush in its pursuit of the jugular. Based on a true story (no, an actual true story), the story is effectively told by director Samuel Fuller and supported by a wonderful score from Ennio Morricone. Tune in expecting subtlety, and you'll be disappointed. It's effectively Bolt meets American History X. Go in with a soft spot for dogs and a love of eighties cult cinema, and you should have a good time with it. As good a time as you can have with a movie about an aggressively, possibly irredeemably racist dog, anyway.