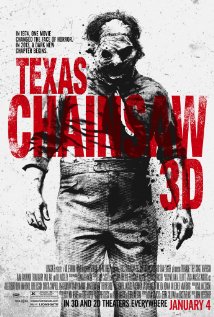 There's a buzz in the air. Can you hear it? Leatherface returns in Texas Chainsaw 3D, a direct sequel to what might be my favourite horror movie of all time. Texas Chainsaw 3D disposes of half of the title, three sequels and a remake (plus that film's prequel) to return to Texas, 1974. Sally Hardesty has just escaped the Sawyer homestead. Leatherface is swinging his chainsaw about, incensed by his own uselessness. And then a mob of furious locals descends upon the Sawyer family home...

Years later, Heather (Daddario) learns that she was adopted, and that her estranged grandmother has left a doozy of an inheritance in her will. Heather is now the proud owner of a massive country house. Should have read the small print though: she's also inherited her inbred cannibalistic cousin, Leatherface, who lives in the basement, probably playing World of Warcraft. It's like the plot of Castle Freak, except with Leatherface and his chainsaw instead of The Freak and its chode.

Leatherface makes his presence known during Heather's housewarming party, immediately setting about his new house guests with his massive chainsaw. Old habits die hard, eh. The first half of Texas Chainsaw 3D is rote and predictable, enlivened by a brief cameo from Bill Moseley and Leatherface's impressive physicality - he's pretty spry for an old guy; meaner and stronger than he's ever been. There are some nice little touches to the film for old fans - I particularly liked the re-appearance of his garish tie from the first flick. 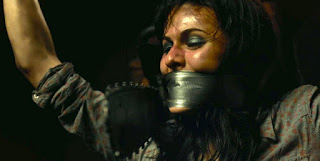 The second half of the film fares better, moving the action from the old Sawyer house to the surrounding town. There an old town conspiracy is uncovered, the Mayor wears a Stetson and cuddly cult favourite Richard Riehle (okay, my cuddly cult favourite) plays a lawyer. There's a nifty sequence set at the town carnival (where Leatherface actually bumps into the Pig man from Saw) and a fairly tense bit in which a cop stalks our psychopath in the basement of his home. That he records his man-on-a-mission with FaceTime (face time, geddit) spoils the atmosphere slightly, but there's a good pay-off.

Now we all love Leatherface (a good title for a sitcom, that) but there was no need to turn him into some sort of sympathetic antihero type. Yet that's what Texas Chainsaw 3D tries to do. It would be plausible to have the town sheriff sympathise with Leatherface if the killer hadn't just spent the last 80 minutes trying to murder everyone he could lay his chubby hands on. The finale veers from inspired to stupid, with characters making ridiculous decisions and the film descending into some sort of Revenge Horror with Leatherface playing the wronged party. I doubt poor Sally Hardesty would see it that way.

Texas Chainsaw 3D is an enjoyable disappointment. There are some decent horror and action sequences, but ultimately the film is very flawed. The characters are unsympathetic and stupid, the script silly and devoid of any humour. Worst of all, this film discards the canon of The Texas Chainsaw Massacre 2, rendering Dennis Hopper and Chop-Top non-existent. Unforgivable. But at least that means Matthew McConaughey never existed either. Every cloud, and all that.