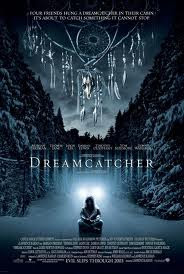 Director: Lawrence Kasdan (2003)
Starring: Damian Lewis, Timothy Olyphant, Thomas Jane, Morgan Freeman
Find it: IMDB, Amazon
If I've learnt anything from Dreamcatcher, it's that 16-year-old me was a fucking idiot. 16-year-old me was the first incarnation of me to watch Dreamcatcher, and he loved it. 24-year-old me, not so much. And I've a feeling I'd think the same about the novel if I tried to re-read that about now.
Ironically, Dreamcatcher's own age is its saving grace. Whereas 16-year-old me (or indeed, the cinemagoing public at the time) couldn't hope to appreciate its cast of relative nobodies (a certain Morgan Freeman aside), now the thing plays like man-crush central. It's a dream cast, starring the likes of Timothy Olyphant, Thomas Jane and My Name Is Earl. There's also Tom Sizemore and Donnie Wahlberg, alongside Morgan Freeman (who completely rocks a rare bad guy role).
Unfortunately, everything else is a bit IT-lite. The childhood flashbacks, psychic abilities and possession all feel like Stephen King trying to reclaim former glories. Only this time, with aliens. The lines of dialogue that might work in a King novel (or even not) don't translate well to film. The 'memory warehouse' stuff should have been wiped from the script. And the Duddits stuff is just cringeworthy. If I hear Donnie Wahlberg say "ister gay" ever again, I'll crush his head between two blocks of ice myself. The mentally disabled Duddits saves the world nonsense is both condescending and cheesy. Although I did laugh when Duddits got stabbed by tentacles at the end. Duddits. Even his name grates.
Knowing what we know now about the actors involved (namely, that Tom Jane, The Olyphant and My Name Is Earl are awesome) the decision to give wet Damian Lewis the lead role feels like a particularly bad one. Anyone who's seen The Baker *shudders* will know he finds it difficult holding a film on his own. Lewis's Jonesey is an achingly irritating character, especially when he's doing his stupid 'possessed voice' (an RP English accent) and to have him (spoiler) outlive both The Olyphant and Jason Lee is a slap in the face to fans of Awesome everywhere.
It's a story so stupid that the characters have to explain it to us in the movie's final line. "So Duddits was the dreamcatcher!" If they'd spent less time on the fart joke and poo-aliens and more time working the script into something intelligible, Dreamcatcher might have been salvaged. Duddits might have saved the world, but less Duddits might have saved this movie.
Still, I can appreciate Dreamcatcher for the things it does well. Morgan Freeman's eyebrows are incredible. Any scene with Jason Lee is a good one. Tom Jane gets to do his action man thing. The snowy environments are nice; very reminiscent of The Thing. And there are a few fun scenes of extra-terrestrial carnage. Fucking Duddits gets attacked by an alien. Timothy Olyphant is in it. Even if he does get a raw deal.
After watching this movie, I too will take to hanging a dreamcatcher above my bed. Not a mentally disabled psychic kid, no, A real dreamcatcher. I'll be hanging it there in the hope that I can forget all about Dreamcatcher.